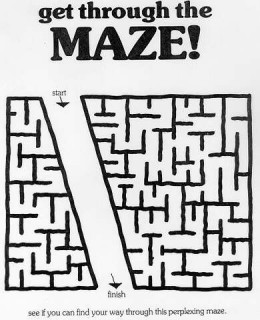 My conversations on sex and gender are getting more and more bizarre. People are sending me notes about basic biology and links to news items on the politics. How is one supposed to respond to that? Explain yet again that the biology is NOT the question or that might does not make right?
You will find the conversations in the comments of the first post, but you will find some points made in the comments to the second one as well.
The unifying characteristic of the comments I recieved is the avoidance of addressing my actual concerns: the lack of proper science supporting the policies and the hidden agenda behind the politics.

Although I think I did already say everything on the subject, I will have to restate some of the points to make it absolutely clear where I believe the problems are. I will have to dumb down the ‘science’ and expose the politics. I will do that using a set of questions. Most of them should be very easy to answer.

This is where we can stop the questions. This is the ‘ONE’ study I am looking for. The one that can legitimize the rest. I do not believe that such study exists, but this is a falsifiable belief.

As I consider the conversations on a number of controversial subjects, I am beginning to suspect that there is a greater need for directness. I cannot expect my readers to get my points unless I make them absolutely clear. With that in mind, here is what I actually think:

I finish this post with the usual uneasy feeling that it will not convince anybody.
Those who agree did already before they started reading this and those who do not, cannot be reasoned with. The points I am making are obvious to me. So far, nobody was able to present any evidence contradicting my conclusions but to quote Ayn Rand again:

….if, on the other hand, I managed to change your mind, let that happy news to be known to others in the comments below.

I was challenged to revise my position based on the scientific evidence presented to me.
I think a single word would do the trick: FUNCTIONAL.

There are only two functional sexes with their associated genders.

Although the one word makes all the difference, let me explain in a little more detail.

Genetic programming is a complicated business

My geneticist friend kept sending me links to studies on the subject. The first set was an unexamined set of links concerned with the practices sex change management, the next few were misdirections, but he finally did send me a link to some true science.

Reading it is what prompted me to write this correction/clarification. The research is aimed at discovering the mechanisms of mammalian sex determination.
This article shows a few important things. It shows that we are at the beginning of a long process of understanding; it shows that the process is quite complex and many things can go wrong with it.

There are only two sexes

Saying this may be arguable, saying that there are only two functional sexes is not. You can either impregnate or gestate which are the only biologically essential function of sex. There is no third way to procreate.

All critical comments I received were focusing on biological aberrations. The common element of those is the fact that they are dysfunctional. As pointed out above, “somewhere in between do not comprise a third sex”. Dysfunctional genetic mutations, developmental aberrations, birth defects and psychological disorders are NOT legitimate gender alternatives. Mutations affecting reproductive functions are different from most other mutations in the sense that they cannot be passed on to future generations. If your mutation makes you unable to procreate, the mutated (whatever) will die with you.

Gender ‘intensity’ and expression is a continuum

I should have made this clearer, but it seemed to me a truism requiring no further explanation.
Just as our height, strength, intelligence and a number of other attributes, our sexuality also places us somewhere in a range. I have known oversexed men and women just as I did frigid women and men with little discernible interest in sex. Does the oversexed macho man represent a different gender compared to the effeminate metrosexual? I wouldn’t think so. It’s all on a continuum. On the two ends are the macho men and the femme fatales with the overwhelming majority of us somewhere in between. Somewhere in the middle, there is an interesting zone of the weird and the dysfunctional. On the edge are the behavioral dysfunctions such as the fetishists, the voyeurs, the S&M folks and the pedophiles. Some function better than some others, some are less harmful than some others but they are still mostly heterosexual, most are willing and able to procreate. The next layer toward the center are the preferential dysfunctions, the gays and the lesbians. They are dysfunctional in an evolutionary sense as they are unwilling to procreate. In the middle are the biological dysfunctions and the gender confused. The people who are unable to procreate. At the very center would be the true hermaphrodites born with both sets of reproductive organs (albeit dysfunctional).

I did not think that I would need to explain this, but here we go.

2 replies on “Dumbed down science”