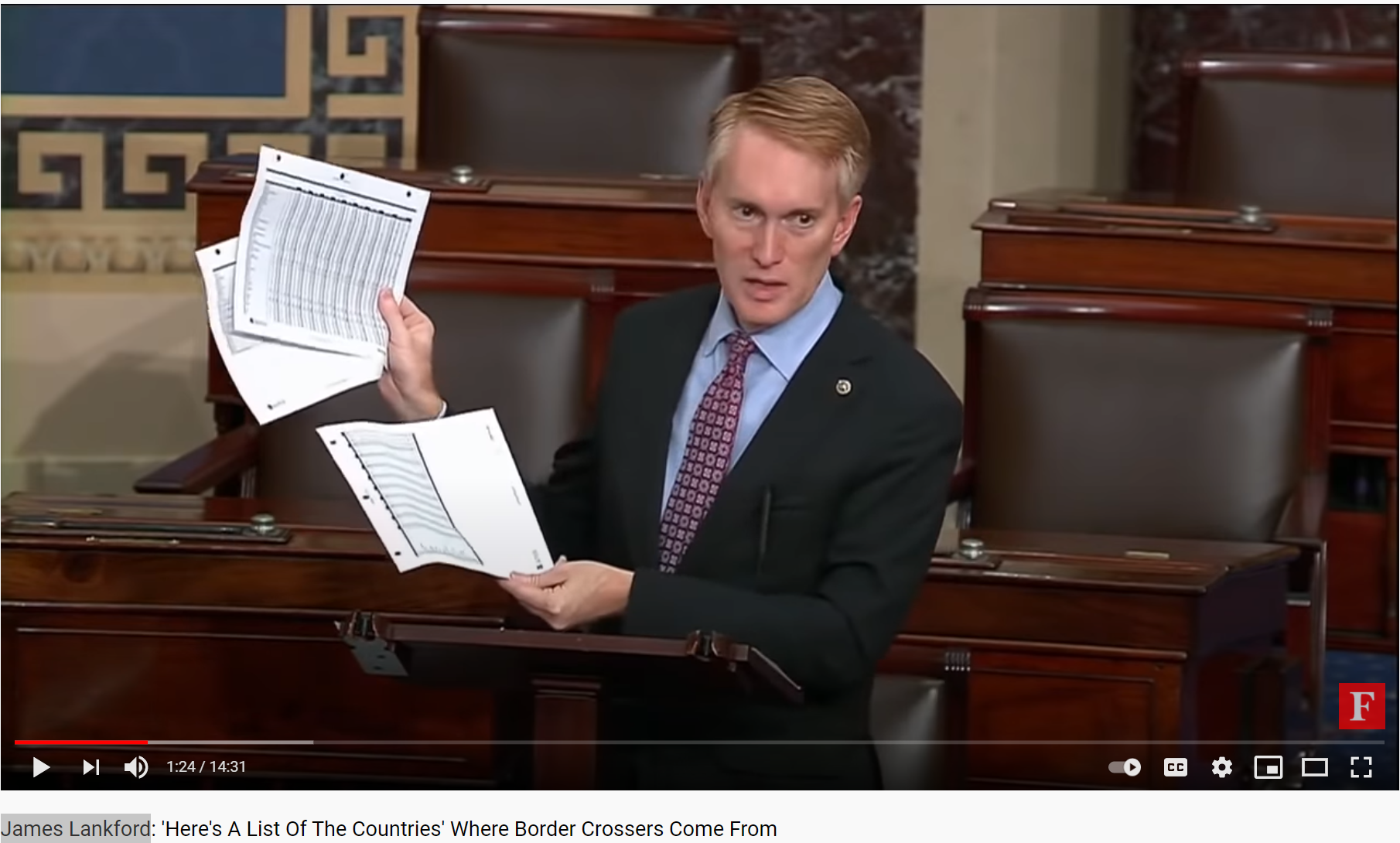 This will be a short post. Watch the video of James Lankford’s speech on the Senate floor.
Seriously. Watch it now, before you continue reading….
It is a good speech; clear and to the point. Or is it…?

Senator Lankford describes the problems perfectly, but seems to be flabbergasted facing them.
He is looking at absolutely despicable crimes against democracy, the rule of law and its enforcement, economic insanity and corruption and still trying to address the problems he sees as if they were unintended consequences of well-meaning policies. He is talking about them as if they were the bugs in the policies, not the features. He is too young. He was born in the year (1968) when the rallying cry of the radicals was the adage: “The issue is never the issue. The issue is always the revolution”

With the left, the issue is never the issue and every ‘bug’ in the policies is a feature. Two billion dollars wasted? Not an issue. It’s a feature. Murder rates going up? Not an issue. It’s a feature.
Nothing the left ever does is without a reason. Everything is in the service of the cause, the creation of as many ‘problems’ as possible for which they can offer a solution, which is always more power, more rules more control. … and ‘accidentally’, more conflict, more division, more suffering in preparation of the next round of socialist solutions. Everything the left does is by design. For the left, every failure is a victory, as they provide the excuse for the further implementation of the policies that created them.

Some conservatives still don’t get it.

They have to be called out, they have to be exposed, they have to be labeled. What the left is fighting for is the total destruction of Western civilization. They cannot be appeased, they cannot be argued with, they cannot be reasoned with, you cannot make them like you unless you are marching in lockstep with them on the path toward an increasingly radical, self-destructive future.
Politeness is a luxury. Appeasement is a sign of weakness. Logic invites ridicule, reason is the fuel of negative emotions.

Let’s consider another, somewhat longer, rant about the Covid policies from Ben Shapiro.
He goes a step further than the Senator in pointing out the actual reasons for the ridiculous Covid response policies. It is all politics, but in his desperate desire to be part of the conversation, to be seen as reasonable, as someone seeking a mutually acceptable middle ground, Shapiro is willing to gloss over highly contentious issues. He is calling out the left, but only sort of. He is conceding the argument for the vaccines, the narrative that they are safe, effective and the proper solution to the pandemic.

Please do not misunderstand me. I like them both. What they are saying is right, what they are doing is important. Still, watching them raises some important questions:

What is the right way to deal with an enemy hell bent on your destruction? When you see the truth and you see that it is harsh, what is the best way to stand up for it? Sticking to the truth as you see it, or making questionable compromises to be part of the dialogue with the hope that you can make a difference? How to protect your world from those who are determined to destroy it? How do you argue with those who cannot be argued with?
By projecting your virtues onto those who don’t have any?