◀Exposure
The baby steps of the big boot▶ 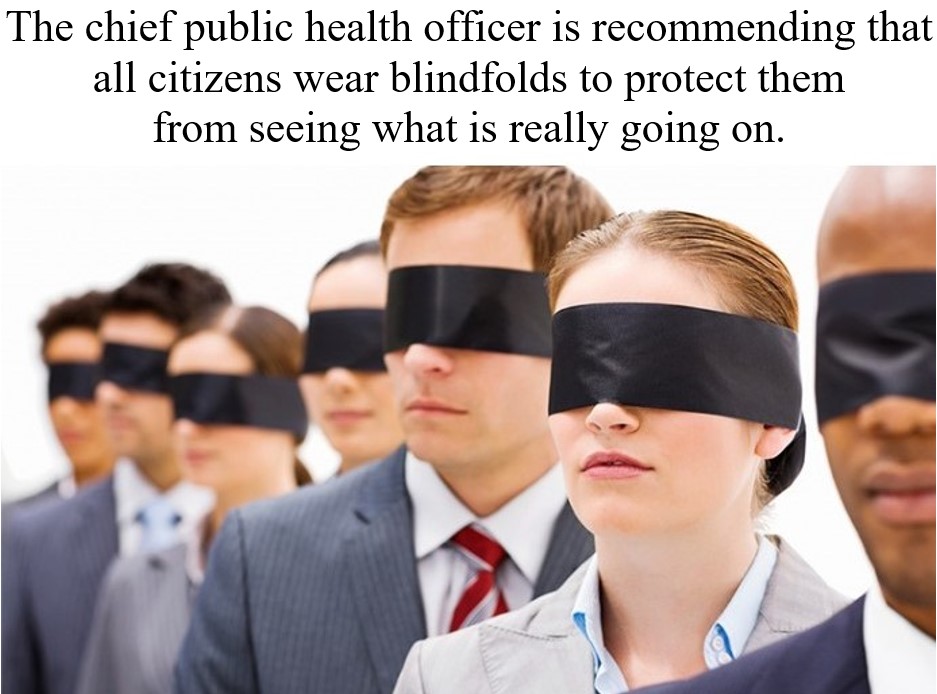 My mother-in-law just turned 86. She is very active, much of her time is spent with sight-seeing trips and long hikes. She is suffering from the lock-down, but she is also puzzled. She is wondering where are the piles of dead bodies promised by the experts? She is surrounded by people of her age, the highest risk age group. Not only nobody she knows is sick, but nobody she knows know anybody who is. Why is everybody trying to scare her? Why is she getting confusing and contradicting information? Why is the story changing all the time? She is not alone with the questions.

In an earlier post, Conspiracy Theory,  I tried the explain what gives rise to conspiracy theories.

Conspiracy theories emerge when we cannot get satisfactory answers to the kinds of questions I spelled out above. When the answers given are not believable. When the dishonesty is just too obvious. When it contradicts what we know or find logical. When we KNOW, when we have PROOF that they are lies. I ended my post with the following conclusion:

“What matters is how much faith we have in the decency, morality and integrity of our politicians. What matters is what we can imagine that they would be capable of doing.”

In times of uncertainty, we need answers. We need to know how to direct our lives, what should we prepare for. If we cannot trust what we are told, we have no choice but to speculate. We can analyze.
We can look for answers that make sense.

We can also just discard the questions and look at what is happening, then ask the most fundamental question: CUI BONO? Once we can determine who benefits, we are a step closer to understand why.

What is a conspiracy?

There are different kinds of conspiracy theories.

On the BBC’s insistence that Youtube should remove the David Icke interview from its platform, Youtube said the following:

“Now any content that disputes the existence or transmission of Covid-19, as described by the WHO [World Health Organization] and local health authorities is in violation of YouTube policies.”

David Icke is not the only one with dissenting opinions. There are plenty of doctors, biologists and epidemiologist disagreeing with the official narratives. Dr. Shiva Ayadurai, Dr. Judy Mikovits and more.
There are voices asking for sanity and a quick end to the heavy-handed lock-down by pointing to the harm it does, like this one. As these voices are getting louder, the mainstream media is getting more shrill trying to keep the hysteria alive. I just learned (from Global news) that Canada will stay locked down ‘till the end of May. They present the death statistics without any context, any reference. As long as the daily numbers were going up, the news was that everything is getting worse; now that they are going down, we just get the numbers presented with a concerned and alarmed tone.

Glen Beck is defined by Wikipedia as “an American conservative political commentator, radio host, television producer, and conspiracy theorist.” He also have thoughts and solid information on the Pandemic. It is worth watching. He is not a self-identified conspiracy theorist like David Icke. He is just accused of being one. His linked show is a perfect example of the fourth type of conspiracy theories. All he does is presenting publicly available information connecting the dots. I checked all of his references; they all check out. This is what’s used to be called investigative journalism.
We could get into analyzing the quoted facts and theories of both David Icke and Glenn Beck, but that is not the point of this post. In the end, Glenn Beck’s claim is simple: the global socialist movement is exploiting this pandemic to further their radical agenda and hasten its implementation.
My claim is simple as well: So does everybody else. It is already the most exploited event of the century.

The most obvious beneficiaries of the crisis are politicians. The fear of the populace enables them to get extraordinary powers. The higher the fear and the longer it lasts the better it is for them. Every politician is trying to milk it. The Democrats in the US packed all their pet spending projects into the ‘relief bill’ that was supposed to address the impact of the pandemic.

The state (governments and their bureaucracies at all levels)

We are surrounded by petty rules as a result of this ‘crisis’ and a whole lot more will be justified to prepare us for the next epidemic. A whole lot of spending will be required with the same justification.

The Feds, their cronies, the equity markets and the investment market

Before the crisis, the Federal Reserve was already at the end of its rope. As I mentioned in Keynesian dysfunction, they lost the ability to stimulate. In a way, the market collapse was a godsent to them. They cannot be blamed for the collapse and with the infusion of the freshly printed funny-money, they may have a chance, at least nominally, to reflate the bubble.

There is massive deployment of surveillance equipment, face recognition software, mobile device tracking, dedicated movement tracking devices; all of them violating privacy laws, yet they are accepted without any significant opposition. Tremendous empowerment that is unlikely to get rolled back.

Serving the interests of the above there is a whole field of device manufacturers, big data analysts and AI programmers to help the surveillance state to protect us. A lot of spending will be justified on this field.

This is a strange category of what can best be described as a public/private partnership.
This crisis normalizes practices that would meet much heavier criticism under normal circumstances. Just look at the example above. The BBC demanding a private company to modify its policies to their liking. This is scary in more ways than I can count, but it is accepted as normal under these new circumstances. It will not be possible to roll it back completely. It could be argued that this is a devil’s bargain and the social media companies will have to pay for it dearly, but that does not save any of us from the consequences now.

The biggest benefit to big businesses is the market shake-out. Large enterprises are somewhat more resilient to sudden and acute shocks than small ones. There is nothing like a market crash to kill smaller competitors. As we are coming out of the recession, it will be a buyer’s market for big companies.
Big businesses are also much better equipped to take advantage of bailout packages. It is not an accident that most of the bailout money goes to big businesses.
The price of the bailout in many in some cases is the government taking an equity position in the businesses it bails out. While this is not seen as a benefit in the business world, it is certainly a form of insurance for the businesses involved. Never mind the fact that it looks very much like fascism.

The pharmaceutical industry can be a big winner in this. Eventually a vaccine will be found. Demanding universal vaccination financed by the taxpayers will be their greatest profit opportunity in a field where their power is constantly challenged by disruptive technologies. There is nothing like a captive market that is compelled to consume your product.

Socialists are the biggest winners and therefore the biggest promoters of the hysteria.  Growth of government, advancing the globalist agenda, implementing a number of redistributive policies, silencing their critics, getting a boost for their 2030 agenda for sustainable development, which is a blueprint for a global transition to socialism. Which is anything but sustainable.

We could also talk about the media, the health-care industry, the welfare classes, but the points above should be enough to show that there is a lot of vested interest in the exploitation of this mostly manufactured crisis. All of these parties have an interest in keeping the alarm high and the crisis long enough for them to get the most benefit out of it. Do you trust any of them to consider your interest above their own? If you don’t, does that make you a conspiracy theorist? Let’s take another look at the questions:

Let me know.
…and watch the Glenn Beck video. The True Purpose of the Coronavirus Wargame – Glenn TV