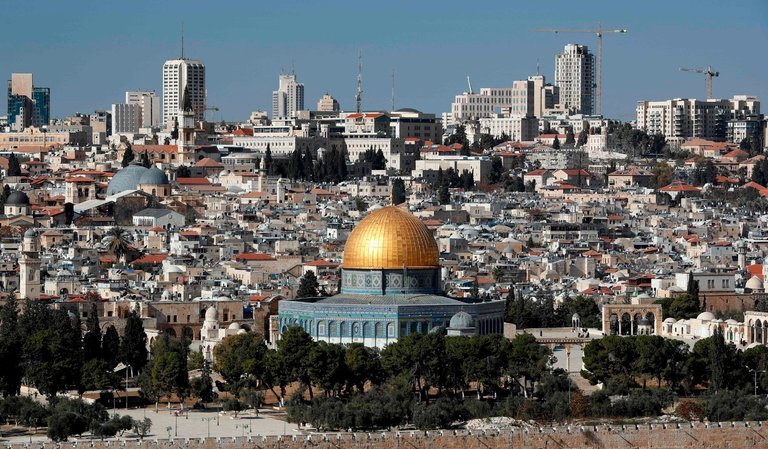 I went to Israel thinking that I am a hardliner. I got out as a much-hardened hardliner. I cannot possibly claim that I have full understanding of its very complex problems after spending only two weeks there, but I can say that the visit either confirmed my preconceptions or changed them in a way pushing it further in the direction of supporting the Jewish state and WHATEVER measure they choose to take against the Arabs.

I could talk about the country, about the beauty of the land, about the beaches, the mountains and the deserts; about the livability of its modern cities like Tel Aviv and Haifa; the incredibly rich history and the majestic archeological sites; about the experience of Jerusalem and its pilgrimage sites; about the fascinating variety of its people, but this is not a travel blog.
The question that was hanging over the whole trip for me was politics. How it is seen and experienced, how much does it matter and where it is going.

I must ask those of you who never been in Israel: what is your image of the country? Especially the conflict with the Palestinians. Starving children running around in tent city refugee camps? Strip searches of the innocent Arabs as they are going to work every morning? Curfews imposed on them by arrogant Israeli soldiers roaming around freely on the occupied lands? I found none of that.

A few years ago, I had a disturbing conversation with some leftist friends pickled into the antisemitic (‘anti-zionist’), Palestine liberation narrative. They were arguing vehemently against the settlements as they clearly had the above described image in their heads. They would, of course, never go to visit such a horrible place. One got all worked up as he raised his voice shaken by emotions saying “The only thing the Palestinians want is to get on with their lives. Why can’t the Jews let them???”

The narrative is so pervasive, that even I had certain elements of it. The greatest surprise for me was to see how little the conflict seems to matter in the big cities. The overall sense of how little the Palestinians matter in the everyday life of the country. Security matters in the settlements (we were staying in one), but even there, it was not oppressive or in any way burdensome. Getting into a settlement was no different from entering any gated community or secured condo in North America.

The most important impression I came away with is the opposite of that of my liberal friends. The only thing the Jews want is to get on with their lives and for the most part they actually do.

A little bit if impressions

A little bit of history (and language)

I have been corrected several times about my use of language while in Israel.
I’ve been reminded that there has never been a country called Palestine, or to be precise, the proper name of the ‘Palestinian state’ is Jordan. The British Palestinian mandate looked like this in 1920 then 1922: 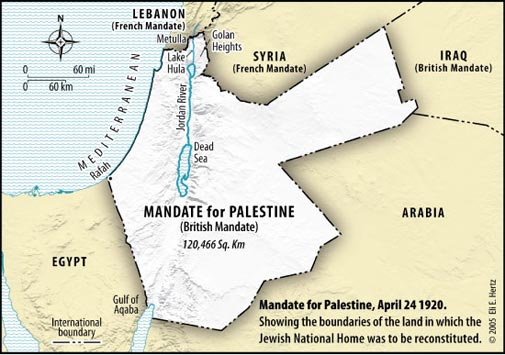 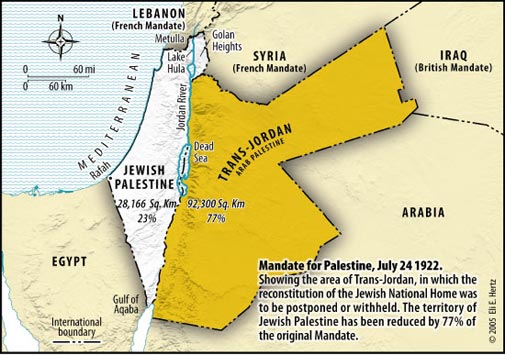 The original plan of the Palestinian Mandate turned into Israel and Jordan. There is no discernable ethnic group called Palestinians. There is no religion, language or identifiable customs that are ‘Palestinian’. ‘Palestinians’ are ethnic Arabs with various, but overwhelmingly Muslim, religious backgrounds. The original ‘promised land’, meaning promised by the British to the Jews, have been first reduced by 77%, then the day after the declaration of independence, invaded from all directions. The Golan Heights, the West Bank and the Gaza strip was taken by the invaders. The inhabitants of the region became citizens of Jordan. The idea of an independent ‘Palestine’ was only born in the ensuing haggle over the land first occupied by Jordan then taken control of by Israel.

I was also corrected for using the term occupied territories. Jews prefer to name the specific regions such as Judea and Samaria, or as the West Bank. It could be argued that they are wrong. The West Banks IS occupied territory. It was occupied by Jordan in 1948 and only partially liberated in 1967. The very word ‘Palestinian’ is etymologically rooted in the Hebrew word ‘invader’.

What the Arabs want

What the Arabs want is pretty simple. The elimination of Israel.
What the anti-Semitic left and their few remaining fascist brethren in the West want is also pretty simple and perfectly illustrated by this cartoon: 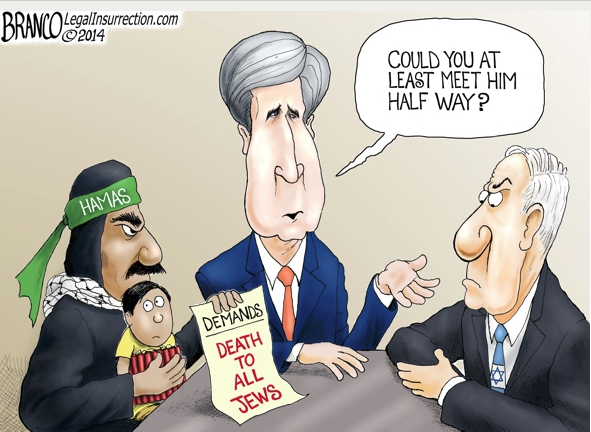 The Muslims want to kill the Jews, while the Western anti-Semites want the Jews to help the Muslims to achieve their goal.
The last thing Muslims/Arabs want is peace. They do not want it on the long run for ideological reasons, and they don’t want it on the short run for practical reasons. The Palestinians are losers. Welfare bums.  The Palestinian territories would be failed states if it was not for foreign aid. (And IF they were states, of course).

Palestinians are the highest per capita recipients of foreign aid in the world.
Half of that aid is spent on sponsoring terrorism.
They have close to 50% youth unemployment rate.
The lowest labour force participation rate in the middle east.

Palestinians are making a lot of money on being or playing losers. They have no incentive to change that. If peace broke out by some miracle, they would have to start relying on themselves. They would have to face the fact that they live under brutal dictatorships run by kleptocrats.
Understanding them suggests that they will start blaming – wait for it – THE JEWS – for their new-found misery. And we’ll be back to square one. For the Muslims, peace is not a solution, but a whole new problem.

What the Jews want

…is again, to get on with their lives, getting on with building an open, inclusive, modern, technologically an economically advanced democracy. Most Jews seem to regard the Palestinians as a nuisance at best, not an existential threat. Some, such as President Reuven Rivlin, advocate a one-state solution that would give citizenship to the Arabs of Gaza and the West Bank. That would be demographic suicide, as it would create a Muslim majority in no time, but the idea shows the extent of the willingness to compromise so that Jews can “get on with their lives.”

What should, but will not happen

Whether they like it or not, the Jews are at war. It would help them if they recognized that fact and started acting accordingly. There will never be peace with the Muslims until they are put in their place, until they are defeated and humiliated. Muslims will always hate the Jews and not only for ideological reasons.
The success of the Jewish state is a constant reminder of the failures of the Arab world. I could have asked my friend, what is preventing Jordan, Syria or Lebanon from becoming the kind of success Israel is? Nothing is stopping them from “getting on with their lives.” What is stopping the Palestinians from electing responsible governments instead of kleptocrats (like Fatah) or terrorists (like Hamas)?

The history of Israel is a history of appeasement. It offered peace time and time again, but every single one of the offers was rejected by the Arabs. Appeasement didn’t, doesn’t and will not work.
What could?

Israel should officially annex the West bank and Gaza and weather the diplomatic storm. Implement the  ‘one state solution’ without the citizenship option. Expel those who cannot prove that they are direct descendants of residents of the land in 1947. Dismantle the gangs masquerading as governments and declare sovereignty over the population. Enforce the laws. Don’t just jail terrorists, but expel them after they complete their sentence.  Reinstitute the death penalty for acts of terrorism. Criminalize any support for ‘martyrdom.’ Treat even the recipients as accessories after the fact.
Teach Muslims that they should not go to a gun fight with stones. Encourage conversion from Islam to any other religion. Encourage Muslims to move. Buy their lands. Control the whole territory. Above all, make Arabs understand that they are ruled. It will not be difficult for them. They were ruled by the Ottomans, they were ruled by the British and they clearly don’t know how to rule themselves.
Leave a tiny door open for full citizenship to those who can prove themselves worthy.

Option #2 – The world can make peace

The world could also make the peace happen. All the world needs to do is to turn its back on the Palestinians, to make them understand that they are pariahs. Stop ALL financial and political support until the Palestinians recognize Israel, until Hamas changes its charter, until the Palestinians actually SIGN a peace agreement. Use the carrot and the stick with the Muslim countries of the Middle East. Spend the money now given to Palestinian kleptocrats on resettlements in other Arab countries. Boycott the countries that are fermenting the conflict for their own ideological reasons.

I could go on with a whole set of radical ideas but I don’t see the point. Either of the above two options could lead to peace, but neither will happen. Israel wants to model itself after the social democracies of the West with their inclusivity and tolerance. Israel doesn’t really have the same will to fight as its first and second generations had, and the world doesn’t seem to care for their survival.

Israel today looks very much like a Western democracy. It may even be safer than some Muslim neighbourhoods in Western Europe. It is a wonderful place to visit and I am a little worried that the tone of this post may do a disservice to the experience. Go and see it for yourself. You may find my concerns unjustified. But maybe you won’t. Let me know.

For more on this subject, read my earlier posts:

4 replies on “Israel, for what it’s worth”