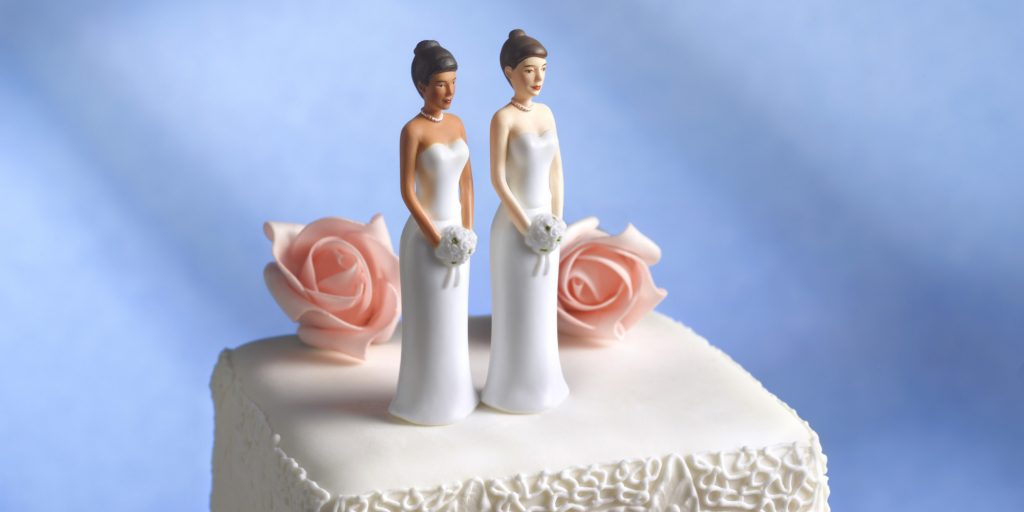 I was reminding a friend of a classic joke:

A guy walks up to a gorgeous woman and says: “Would you sleep with me for a million bucks?”
The woman looks at him and says “Well, OK……”
Then the man says: “how about for $50?”
The woman gets indignant: “What kind of woman do you think I am?”
The man answers: “We already established that, now we are just negotiating the price.”

This is the prostitution principle.
Once you accepted the premise, you cannot get offended when you are treated accordingly.

The day after I mentioned the joke, I got reminded how much it is all around us and how much is the joke on us. It is most perfectly illustrated by the legal arguments in the case against the owners of Sweet Cakes by Melissa who, in 2013, declined to bake a cake for a lesbian wedding.
Last week their case was heard by the Oregon Court of Appeals.
The various courts and human rights commissions have been discussing these and similar matters concerning this case for over three years now. Emotions are high and the case is highly divisive.
The title of the FEE article is “Bakers Accused of Hate Get Emotional Day in Court” while in the magazine LGBTQ Nation “Oregon lesbian couple opens up about the pain of the Sweet Cakes case”. Little reason, vehement emotions, both sides seeing themselves as the victims.

The questions and concerns under consideration were mind-boggling:

But they were also contemplating finer legal questions, such as:

The only question, the only one worth talking about, the question of slavery was never mentioned. Whether some members of a supposedly free society should be allowed to compel another to do something for them. If I am allowed to use the full power of the state to force someone to do something for me, then I successfully made that person my slave. That is the prostitution question, the rest is just negotiating the price.

‘Compelling reason,’ ‘freedom of expression,’ ‘what is art,’ ‘religious exemption,’ ‘the proper extent of compulsion,’ ‘the right amount of the punishment’ are all just subterfuge to divert attention from the real issue; that some politically favoured groups have the full support of the state’s power to enslave others to serve their needs.

Nobody should have the right to force me to do anything for them, but that question seems to be at the heart of most politically charged issues around us. The left has an ever-expanding list of ever more insane demands, all based on the same premise: we live in a world where the self appointed representatives of moral superiority have the right to arbitrate public morality which can at any time overrule individual rights.

Conservatives and libertarians have prostituted themselves a long time ago by accepting the premise of the left, the idea that questions of morality could and should be subjected to ‘democratic’ decision making, political will and judicial activism. Once we accept the leftist premise, the rest is just negotiation. The situation is so bad, that the basis questions are not even asked. The books are full of laws assuming that slavery is acceptable, and self-ownership is irrelevant. The insanity of it is so serious that I will quite possibly be considered insane by some for pointing it out.

We are in a persistent state of negotiating our basic freedoms away because we never dare to say that certain things are not negotiable. Our bodies, our minds, our property should not be commanded by anybody else. Every single argument in the case quoted above is irrelevant. The only argument the lawyers of the Kleins should have advanced is the unquestionable right of freedom from slavery.

The only way to combat the left is by sticking to principles and arguing everything based on the fundamental morality of those principles.

The problem the right has is the lack of faith in the morality of its principles. When confronted with a leftist gotcha question such as “would you let people put a ‘no niggers allowed’ sign onto the door of their business?”, people buckle. They don’t know how to answer because the question they have to answer is not the question itself, but the insinuation, the projection behind it.
The tactic is used often by the left because it works most of the time. Puts their opponents on the defensive.

So what do we all tend to do? We accept the fact that we will get screwed and start negotiating the price, but the moment we do that we lost the war. We may still win a battle here and there, but we will for sure lose the war because we agreed to fight it on the terms of our opponents.

Once you accept the premise, you have to live with the framework.

Once you accept the laws of your own enslavement, you can only negotiate its conditions.
The only principled argument of this case is to say that NOBODY should have the right to force you to work for them and any law that says otherwise should be declared unconstitutional.

3 replies on “The prostitution principle”