Look at the two maps above. They are of the same, the 2016 US presidential election. The first one shows the result of the votes by county, the second shows the electoral votes if only the votes of 18 to 25 years old were counted. If you want to understand the divisions better, there are several sites with maps and graphs explaining the results. (Business Insider and SurveyMonkey)

We live in a time of divisions so pronounced that it would be hard to find another like it. Some of us try desperately to understand the reasons behind it.
You can play around with this interactive map to see how the outcome would have differed based on various demographic scenarios. Here are just some of the most striking outcomes:

But what does it all mean?

The map displaying the electoral college votes by county shows an important trend that we can observe in other elections as well: the more urbanized the electorate, the more left leaning it is. We can only speculate why. Could it be that mowing our lawn and cleaning the snow from our driveways can create a propensity for self reliance in us?  Does living outside the metropolis puts us close enough to nature to influence our political leaning? That being closer to reality makes us conservative? The best overall predictor of the result is where we live and the best explanation is that being closer to nature brings us closer to reality which is always conservative.

Consider this map, and compare it with the first one above: 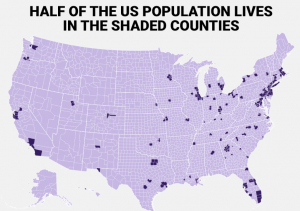 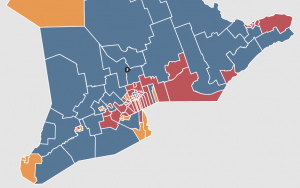 The overlap is quite fascinating. It is difficult not to notice that population density strongly correlates with leftward political leaning. You will find the same pattern in Canadian election maps. In Toronto, the city centre of liberal red and socialist orange is surrounded by conservative blue suburbs.

I do not have maps of European elections which tend to be a little more complicated anyway, but we know that the Brexit vote had the same pattern, it was the rural vote that won the referendum. (see the TED talk link below).

The left’s explanation is always some variant of describing conservatives as primitive, unintelligent, unsophisticated, violent, racist, fascist, selfish and uncaring brutes. The only evidence the left needs to establish that is knowing how we vote.
It is understandable that they are in such distress. Their world fell apart in an upset that could be comparable for them to Neanderthals winning over Homo Sapiens.

Alexander Betts makes a passionate case in a TED talk for the (re)’education’ of those unenlightened conservatives. The communist understood perfectly the power of indoctrination, hence Lenin’s famous edict: “To learn, to learn to learn” Indoctrination has always been a central role of public education.

When we talk about politics in public, when the media discusses it, most of the talk is about emotions, promises, blame, projections of intent, sometimes about strategies and policies but hardly ever about the overall goals:

…and the same is true for any issue on the leftist agenda. Education, multiculturalism, immigration and environmental policies are all designed to create an environment that is pushing people toward giving more power to the left. The correlations above are so strong that it is difficult to imagine that they are not conscious parts of the design. It is difficult to imagine that the policies are pushed for ideological reasons ONLY with no regard for the obvious political benefits.

The politics of the left is self serving, but so is that of the right. We all believe that the world would be a better place if it went in our preferred direction. There is no shame in admitting it. What is shameful is trying to hide the agenda as the left does. Political self interest should be discussed openly. It won’t help to reconcile the differences, but it will help mapping the fault-lines of the divide.