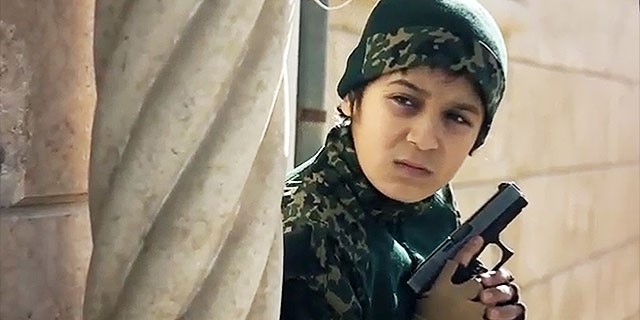 Any time I think that Muslims cannot shock me any more, I am proven wrong.

I came across this ISIS propaganda video  today. I shared it on my Facebook, then I deleted it a minute later. Watch it if you wish, but be prepared for extreme gore. Blood mixed with brain matter gore generated in front of your eyes.
The video starts with first person shooter perspective Hard Core Henry style and it is ‘enhanced’ with some digital text overlay on the targets to further appeal to the video-game generation. The kids are around twelve years old or younger; practicing the slaughter of tied up prisoners in an abandoned building.
Do you see them as children or as soldiers? Do you take them seriously? Would you shoot back to kill them if their guns were pointed at you? Would you like to see these boys as children refugees in Europe or America? Do you see them as victims or as combatants? Would you think of them as champions of peace?

Then later the same day I watched a one hour interview with Dr. James Mitchell, one of the ‘inventors’ of waterboarding, who recalls a conversation he had with Khalid Sheikh Mohammed about Islam.

He (Mitchell) asked him how can Muslims claim that Islam is a religion of peace considering its extremely violent present. You don’t understand, said KSM. There can be no peace until every living creature submits itself to the will of god. When Muslims fight for world domination, they fight for peace. They are obligated to impose the will of God on the whole world because only then can we all live in peace.

The argument is, of course, bogus. There is no peace in Dar al-Islam or any part of it. The muslim world is extremely violent. Muslims are killing other Muslims in the name of Islam. In the linked video, the children are killing other Muslims for……. whatever the reason, but not being Muslim cannot possibly be one of them.  People in the Muslim world are killed for not being Muslim enough. Islam has several branches and sects, all of them with their own version of the ultimate truth and interpretation of the will of God. There is absolutely no reason to think that this would change once Islam rules the whole world.

Righteous posturing and violence are the only things sustaining Islam. If it would ever run out of enemies on the outside, it would have to find them inside which is what it has done throughout its history. The Taliban instituted terror in a country where 99.8% of the population is muslim. Islam is fundamentally parasitic. Once it kills a host, it starts consuming itself.
Still, there is some twisted logic in the violence for peace argument.

A Muslim friend at a dinner party told us that the word Islam means ‘peace’. When I corrected her, pointing out that Islam actually means ‘submission’, she conceded the point with the argument that it is the same thing. You will find peace when you submit.

My most favourite dog ever was an alpha dog. He got into fights all the time, but he never hurt another dog. The fight was always over the moment the other dog showed signs of submission.

I grew up in an abusive household. Submission and obedience were absolute prerequisites of peace, but not sufficient, as the rules were never exactly clear. They were dependent on the whim and blood alcohol level of my step-father.

Communism is also peaceful when you submit to the will of the rulers. The victory of communism was supposed to usher in a blissful world of peace and harmony amongst the nations under its rule. It never really happened, again, because the rules were not based on any measurable, testable criteria. I grew up with slogans urging me to fight for peace. “War is peace” may sound absurd, but not when you have to live it.

Utopias that promise a conflict free world always turn out to be the later, peace by power.
In the end, Muslims are right. Islam is the religion of peace. It is just not the kind of peace we want, and we should never forget that there is a significant difference.

The last news item of the day came to me on a ticker of a news station informing us that:
“Judge Quackenbush denies motion to dismiss torture suit against Mitchell and Jessen”
Yes, this is the same Dr. Mitchell in the linked interview, who was hired by CIA to devise (with his colleague Jessen) a humane yet effective interrogation methods (torture, if you will) to extract information from suspected terrorists. They did just that. Waterboarding does not cause any lasting physical or psychological harm.  Only severe discomfort for a few seconds.
Think of that while you are watching the juvenile butcher peaceniks and the splattered brain matter. These boys are fighting for peace.