It is frightening how fast the world is changing. How formerly unimaginable horrors can become the new normal we have to learn to live with. How things that were unacceptable to most one day will be compulsory to accept under threat of severe punishment the next.

The picture above is from a video someone sent to me just a day ago. IT IS VERY GRAPHIC, watch it only if you have a strong stomach. You can find many more on the site that is its source, such as this one with the headline: Child Beheaded on Truck Bed by Moderates in Aleppo, Syria.

The keyword is ‘moderates’. People who consider it so normal that they do not make an attempt to hide their face. They are smiling and laughing, but most of all, they proudly praise the greatness of their God. And they may show up in your neighbourhood. Maybe not the butchers, but the smiling ones hanging around. Our politicians, cheered on by the left and the media, WANT them to be your neighbours.

I remember just a few years ago leftist intellectuals claiming that no mutilations are happening in Muslim counties. It is just a myth, we were told. Today you can watch it live. It is not that easy to explain it away. Not that they don’t try.

The real horror is not the horror of the videos, but the fact that we are coerced to accept it as normal. That we are expected to learn to live with it. That we cannot call it what it is. Since it is so normal, maybe we should show these videos to our kids in schools. It may prove to prepare them better for our future than putting condoms on cucumbers do.

I had a leftist intellectual for dinner a few days ago. Since he claims to read my blog, I found it especially ironic how he presented his argument in the framework I ridiculed in my post “Beating the Blacks.”
We should not be concerned by the numbers, he said. Muslim violence and extremism is negligible. “You should worry more about white policemen killing unarmed black man than about Muslim terrorism.”
Of course, he did not have the numbers, which are perfectly sourced in the post I linked to in my own about Black Lives Matter. His statement was just leftist dogma routinely regurgitated.
He believes, along with Barack Obama, that we can ‘absorb’ a certain number of terrorist attacks, especially considering how we are absorbing racist police brutality.

The left is telling us that barbaric Muslim brutality is the new norm on the one hand while it has nothing to do with Islam on the other. There is nothing to see here and we should learn to live with it.

I would like to see every advocate of this wisdom tied to a chair á la Clockwork Orange and forced to watch the videos. With their children. 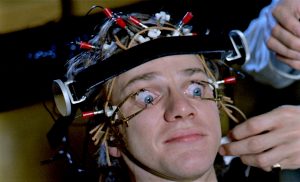 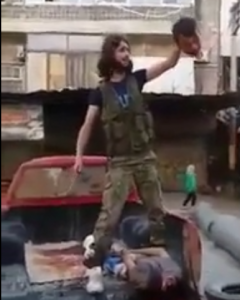 But maybe I shouldn’t wish for it. The left is violent enough already and seeing the horrendous barbarity may not shock them the way it shocks me or you. For them it is normal. They can absorb it. They have no problem with it. And they know that it has nothing to do with Islam.

They also believe that we have much bigger problems that need to be dealt with such as the case against Jordan B. Peterson whose crime is his unwillingness to submit to the will of the University of Toronto thought police and its demands for political correctness. Peterson is a valiant champion of reason and decency, but it is still far from certain that he can prevail in his fight against the dark forces of the political left. They want to shut him up and destroy his illustrious career for his refusal to comply with their PC demands.

The real problem, you see, is NOT real violence, real harassment and real coercion, but the victims’ unwillingness to submit to it.
I am actually worried that I may face harsher punishment for making Muslims look bad by sharing these videos than the people pictured in it for committing the murders.

This is the new normal.