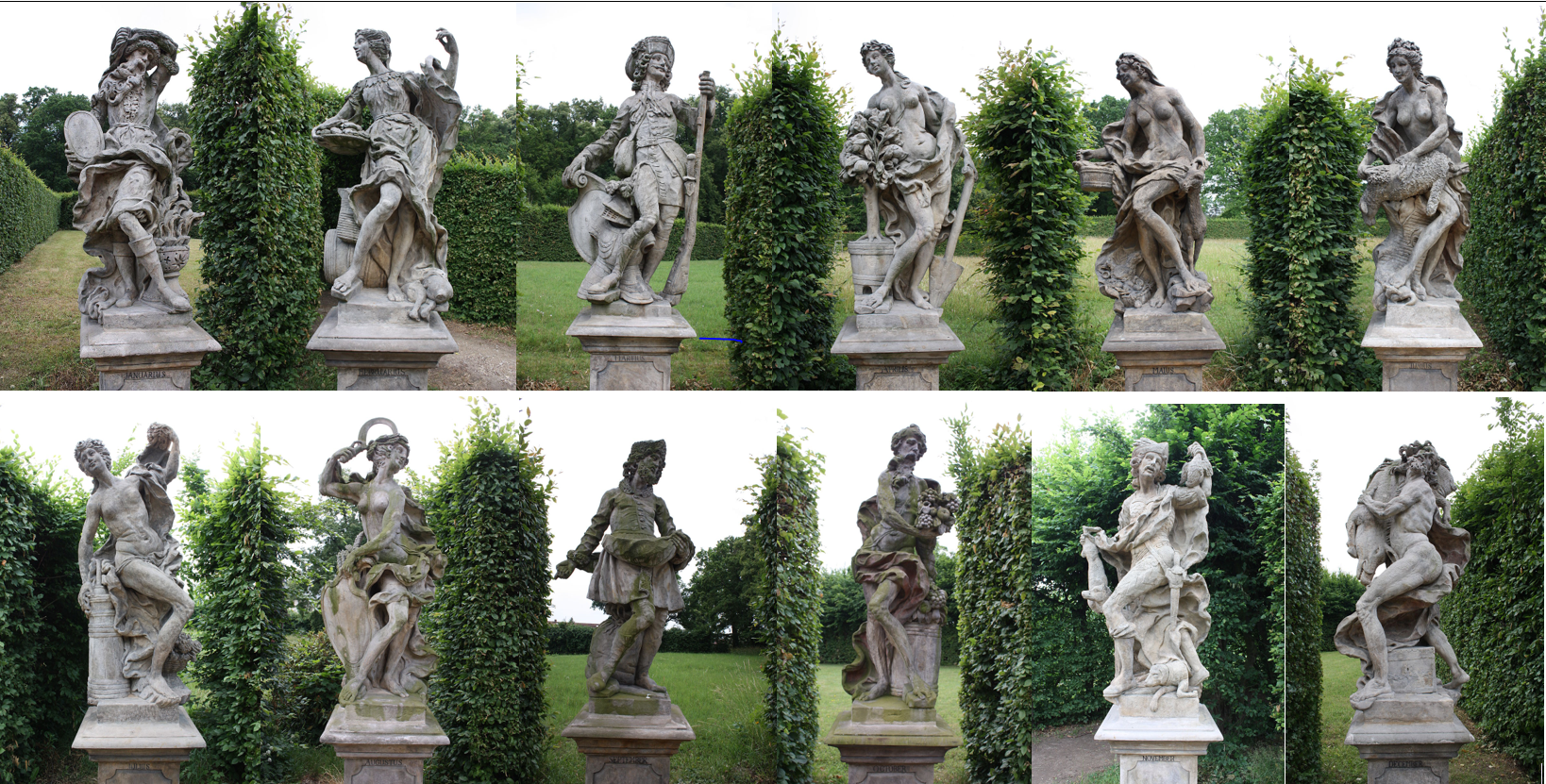 I was walking around in the picturesque town of Lysa nad Labem, my companion reminiscing about the way it was when she went to elementary school there under the communists. The stores that are still the same, the things that are new and the bus-stop that moved. In a small side street, we passed a building with an open window. There were school children inside rehearsing some cheerful musical.
A few buildings from it, we heard the sound of hymns coming from a small Church of a Hussite congregation.
Then we went for a walk in the garden of the town’s castle, bought by a distinguished general of the 30 year war and turned by his son into the baroque marvel that it is still today.
Beautiful baroque garden filled with statues. Allegorical representations of the twelve months and the four arts amongst others.

It was all very quaint and peaceful, yet I couldn’t help wondering how long will it be so. What will happen when the Muslims come? What could this place possibly offer to them? EVERYTHING that makes it appealing is haram for Muslims. The national food and the national drink, the love of the arts and humor, the all pervasive history. It is not possible for them to relate to it. Let me repeat it: IT IS NOT POSSIBLE. It is not possible to be Czech and Muslim at the same time. The culture, the history, the attitudes, the expectations, the sensibilities are simply not compatible. Being Czech means growing up surrounded with people who all know what Svejk is about. People who can all relate to Kafka and get emotional listening to Má Vlast. But can’t this be acquired? Of course it can be. I devoured the words of Kafka when I was a teenager, found endless amusement in Svejk and still get emotional listening to Ma Vlast, yet I would still be a long way from becoming Czech. That would take at least a generation.

Come to think of it, I read all five books of The Leatherstocking Tales, the short stories of Stephen Leacock and Kenneth Roberts’ “Northwest Passage” before I came to Canada.
But then, I am from a compatible culture and I would not want to live in one that I do not like or have no willingness to integrate into.

Walking around in Lysa nad Labem we only met two (likely) Muslims. One working on the parking lot, the other manning the kebab shop.  I must wonder how much desire do they have to integrate. What are the odds that they would know the names of Hasek, Kafka or Smetana? How many of the million new Germans could identify Beethoven’s 5th symphony or Bach’s Toccata and fugue in D minor? What are the odds?

Integrating into a new culture is very difficult even if there is some degree of compatibility, but when facing the degree of incompatibility Muslims do, the odds are not very good.
Something must give. These new Europeans will have to destroy the Muslim within, or the Kuffar without.

The feeling I had walking around was sadness. I felt the history around me and I felt how fragile it is.
As I grew up in this world, history was not a question for me. History was my roots, the very foundation of my identity. I did not have to be a believer to appreciate the achievements and monuments of Christianity. Everything around me was infused with history. Music, fine arts, architecture, literature was all talking about the past few thousand years of this greatest civilization that ever existed on the planet.
The future was a question, the past wasn’t. The communists derided the past, but (with a few exceptions) did not destroy it. Their triumph was a triumph over history. They left the past alone.
The new Europeans have no stake in our past. It is not part of their identity.
I have to wonder: what will happen to the naked statues in the baroque garden? Will they be covered up as in Rome or will they be destroyed as in Palmyra?
Will the Churches be converted to Mosques as in Istanbul or just destroyed as they are today in Egypt and Syria? Palmyra stood for thousands of years. How long would it take to destroy the statues of Lysa nad Labem?
How long would it take to force the school musicals and the Hussite hymns behind closed doors and windows? How long before the first church gets converted to a mosque? How long?

As I was soaking in the past in the present I realized that it is not a solid firmament. It is possible to lose it and that would be sad because it is a beautiful history with amazing achievements that would also disappear with it.

The past can be easily destroyed and without a past, we’ll have no future either.

3 replies on “The future of the past”