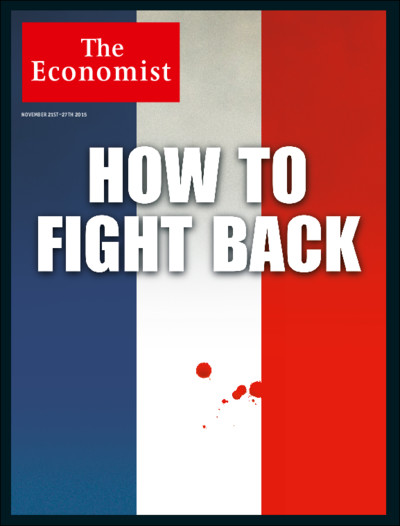 Just as I was about to post my previous article, I got my latest issue of The Economist with five articles on the subject indicated on the cover. For a second I thought I may have to rewrite my post to refer to some ideas. I didn’t find any worthy of comment. All tactics dealing with symptoms. How to do better policing, how to fight the war in Syria, how to rearrange spheres of influence in the Middle-East.

No discussion of root causes and no thoughts about long term solutions beyond some platitudes about the need for peace. There were only two strong themes emerging from the articles: calls for the centralization of power within the European Union and calls for an unwavering commitment to immigration.

The questions, however, if we wish to address the problem effectively, are: how did we get into this mess, who is responsible for it and now that we are in it, what can we do about it.
I will talk about the two problems (mass immigration and terrorism) interchangeably as they are closely connected, even if their root causes may be different.

There is plenty of blame to go around and many lessons to learn from but nobody seems to pay attention to them. This list, like the previous one will be far from exhaustive, and even further from being comprehensive. Every point would deserve a dedicated post, some even a book.
Here, I will just try to illustrate how superficial and shallow the approach to the problem in the press and in politics is. I will give some options to place blame.

From my previous few posts you may think I blame Islam or Muslims. Nothing can be further from the truth. The only healthy attitudes toward Islam are contempt toward its ideology, resistance against its goals and compassion for its victims (in which group I include the Muslims themselves).
In the end, Islam is what it is. What makes it so dangerous today is not its internal values but external circumstances entirely beyond its controls. Circumstances that were either accidental (oil) or created by others (the history of the Middle-East). If it was not for oil, the Saudis would still be primitive Bedouins entertaining their goats, not the royalties of the world. If it wasn’t for the suicidal demographics of the advanced welfare states, there would be no place for Muslims in their societies. If it was not for the cultural self-doubt of Western democracies, Muslim political aspirations would be inconsequential.
Islam is an unviable ideology. It cannot create, it can only destroy. Its history has a pattern of bloody conquests followed by parasitic exploitation ending in inevitable decline and miserable stagnation.
Muslims did not create the problems today, they are just taking advantage of them. As I said in a previous post, Muslims are not the problem, we are. Blaming Islam is akin to blaming your fever for your illness.
(Which, of course, does not mean that you should eschew fever depressants.)

If it wasn’t tragic, it could be called ironic that Germany, the inventor of the welfare state is today the most prominent victim of its unintended consequences. The deal the welfare state offers is that in exchange for some money and freedom it will provide not only physical but economic security as well.
The unspoken part of the deal is that in order to succeed, the state must destroy its competitors: the family and civil society. Without those two, there is no need for children. The declining birth rate is an unintended consequence.
To succeed with the fraud, the state has to offer more than what it takes which is just another way to say that it has to promise more than what it can deliver.

It is becoming increasingly manifest that the welfare state is unsustainable and that it does not know how to reform itself; how to retain its power without destroying its economic base. Debt and immigration are the last ditch efforts to keep the party going.
Without the pressure from an unsustainable reality – for which the welfare state is solely responsible – population decline would not be an issue. Without the cradle to grave nanny state, the population decline would not be happening and there would be no need for mass immigration from hostile and inferior cultures.

If it was not for oil, Muslim cultures would keep withering away, just as they did in the 19th century.
The only credible alternative to fossil fuels today is nuclear energy. The environmental movement was instrumental in the crippling of the nuclear industry through their demands for ridiculous standards and regulations. It was their expressed goal at some point to kill the industry by making it too expensive through excessive regulations. Their success in this regard makes it extremely hard today to build new reactors, to introduce smaller, safer, cheaper designs. If it was not for the environmentalists’ vehement opposition to nuclear energy, we would be much closer to a carbon-free economy and hence to a world of Islamic irrelevance. The environmental movement is just as self-destructive as the welfare state is.

Environmentalists are also responsible for reliance on conflict-oil through their vehement opposition to the fossil fuel industry in North America (See Ethical Oil). Their opposition empowers Muslim dictatorships.

After a few centuries of astounding successes, western civilisations lost their cultural self-confidence.
As if they felt guilty about their successes. This cultural malaise found its ultimate expression in postmodernist philosophy which became the staple ideology of modern universities churning out generations that are taught to be ashamed of the achievements of their own cultures and to treat it as equal to any other, no matter how unaccomplished, primitive, violent or corrupt they are.

Multiculturalism is an off-shoot of the cultural relativist zeitgeist. It is the official policy of Western democracies. It is a failure in every one of them. Multiculturalism makes liberal cultures defenseless against intolerant autocratic ones such as Islam and it does this on top of the material support it provides to intolerant ideologies and cultural practices. As Mark Steyn puts it in this debate, multiculturalism is a unicultural phenomenon. It is to say that “our core value is that we have no core values.” Multiculturalism makes it possible for hostile foreign powers such as Saudi Arabia to build ideological footholds for Islam around the world.

Leftists are fascinated with totalitarian creeds. Their fascination with the totalitarian part can easily override even their own core causes. This is how we can end up with oxymoronic organizations such as Queers for Palestine. The political left is the fighting arm of the multiculturalist agenda. (I will address this point in some more detail in my next post.)

History is full of misdeeds. The handling of the partitioning of the fallen Ottoman empire was disgraceful and it is responsible for quite a few of the problems. The British share no small portion of the blame for the present day problems of Palestine, and as an extension, the problems of the Middle East. The fact that these misdeeds happened in the relatively distant past would only lessen the responsibility if they learned something from it which does not seem to be the case. Their meddling is just as stupid today as it was a hundred years ago.

The French are not without blame either. They were engineering their present problems with the process of dismantling their own colonies in North Africa and elsewhere. Their failure to assimilate their former colonial subjects is one of the sources of their problems today.

Whitewashing the history of Muslim conquests, equating the crusades and Muslim terrorism; using it as an excuse for Muslim atrocities hundreds of time worse is not helping.

The irresponsible politics of the United States is a contributor to the problem. Even though David French argues convincingly in the National Review that No, George Bush Is Not to Blame for the Paris Attacks, I would still insist that he bears some responsibility. The Iraq war was started on false pretenses and lasted about ten years longer than it should have. It created enormous level of corruption on both sides and the real cause of the war (OIL) was all too obvious to everybody. George W. Bush did not create the problem but he made it worse.
Then came Barak Obama and turned it into a disaster. The United States is the most powerful nation in the world, but it no longer knows how to use its power responsibly. Not for over a hundred years.

If I have to name the one person with the biggest share of the responsibility for the present problems, the bloodshed and the misery associated with the Middle East today, it would be the Nobel Peace Prize Laureate Barak Hussein Obama. He ignited the fire with the Arab Spring. He turned Iraq into a living hell as he literally handed power over to ISIS. He stoke the fire in Syria. He gave a new life to the Iranian Mullahs while completely ignoring the plight of the democratic opposition. He turned Libya into a hell hole by starting an illegal war in it then abandoning it to chaos; but his worst crime is his vehement denial that the problems could have anything to do with him or Islam.

Where we are today

The tragedy of the situation we are living with is that hardly anybody is discussing these problems.
Yes, there are some shrill accusations that it is George Bush’s fault; the Muslims blame the problems on the Jews and the Americans, but there is no serious discussion of the root causes. There are no grants to study the harm caused by the environmental movement, or the welfare state, no honest analysis of the failures of the state.

Strangely, for the writers of The Economist, the problems have nothing to do with the economy, the problem is all about politics. How to handle the present situation, how to give more power to the state to handle it.

Their position is, in a way, understandable. To tackle the real causes we have to take a close look at the state and the statists. Once we do, we will find that they are responsible for the brunt of the problems.
How can we expect a leading statist publication to admit that? At times I have the feeling that The Economist aims to become the official propaganda organ of the world government which they are trying to cheer into existence.

2 replies on “The failure of analysis”