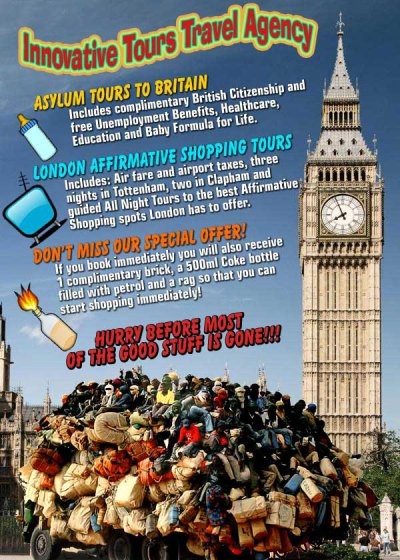 From this Telegraph article you can learn, if you did not already know, that the political left is using immigration for partisan political advantage. While we do not have such a smoking gun in the US or Canada, it is not a secret in either place that immigration can, is and will be used to expand the state and push it toward the left.
Governments in the developed world are digging themselves into a hole and short term political interest seems to make it impossible to reverse course.

Milton Friedman said that “In principle, you ought to have completely open immigration. But with the welfare state it’s really not possible to do that.”

Milton Friedman is absolutely right. In principle we ought to have free immigration, but we live in a real world and if libertarians ever want to be taken seriously, they need to formulate policies that are taking that reality into account.

When libertarians ask for open borders, they assume that immigration will result in cultural absorption; that all immigrants will eventually integrate into the culture of their host countries at least to the extent of becoming productive citizens. The essence of this assumption is that things will go on the way they do now. The assumption is true to some immigrant groups but not all. People from similar or sympathetic cultures to ours do follow this pattern. Poles integrate well in Britain and Hindus integrate better than Pakistani Muslims. But none of that really matters. As Paul Joseph Watson points out in “The Truth About the Migrant Crisis”

“ isn’t it an amazing coincidence how left wing parties in Europe who will benefit from votes from future naturalized migrants and their children have been so welcoming of them? Being completely dependent on government those naturalized citizens will then vote for even bigger government”

It is not surprising at all. The biggest promoters of mass immigration are the statist parties in direct proportion to the degree of how statist they are. The heads of the Canadian leftist parties are in a bidding war about the number of immigrants (sorry, ‘refugees’) they want to accept.
For the migrants in Europe this is also a practical matter. Does anybody seriously think that the migrants are heading to Germany because of their love of Beethoven or the philosophy of Immanuel Kant? They are heading to Germany because that’s where they can get the most free money.
(€86 /month for a single adult in Hungary versus €374 in Germany)
Just like the politicians welcoming them, they know what is in their immediate interest.

To see how disgustingly political this can get, all we need to do is to look at the poster case of the issue: 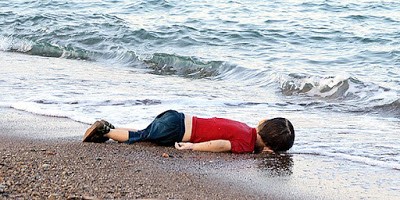 Who can we blame for his death? The answer today in Canada and just about everywhere else in the world is clear: Stephen Harper. Every political opponent, every media outlet pointed finger at him.

Now let’s look at the facts:
Aylan Kurdi was not the only child who died in that boat. Several children died, but some of their parents survived and several of them came forward identifying Abdallah Kurdi, the father of the little boys, as one of the people smugglers. He was at the helm of the boat while people were begging him NOT to drive it so recklessly.
Abdallah Kurdi should be in jail for human trafficking, reckless endangerment and multiple counts of negligent homicide. LOOK AT THE PICTURE! He did not even bother to put a life jacket on his own child!

And this is Stephen Harper’s fault??

Tima Kurdi, the Aunt of the dead boy was catapulted into the spotlight the day after the picture of dead Alan hit the media. The finger pointing was immediate. Within a couple of days, however, it turned out that she was lying, she did not try to sponsor the family of poor little Aylan, it was the family of her other brother Mohammed who applied for refugee status but got rejected.

Abdallah Kurdi and his family NEVER APPLIED!
And it is still Stephen Harper’s fault?

The case was discussed every day on CBC for over a week. Everybody and their uncle was interviewed about it, especially in the light of the upcoming election.
Tima Kurdi’s 15 minutes of fame is over a month old by now, she was even flown to Brussels to prop up the case of the Syrian refugees. Because she can sob so convincingly on television!

By the time the article “Strong Proud and free-riding” went to press in The Economist, all of the above was known. Still, the case was used as the introduction to an article of heavy Canada bashing.

“The boys’ aunt, who has lived in Vancouver for 20 years, had been trying to secure entry for her two brothers and their families.” ‘Canada has failed’, Tom Mulcair, leader of the centre-left New Democratic Party (NDP), declared.”

Notice the wording ‘trying to secure entry’. It can mean official sponsorship just as it can mean sending money to pay the people-smugglers. In reality, it was the second, but the entire article treated the case as if it was the first. It is just beyond the pale sleazy partisan politicking.
And this is what the Libertarian Party of Canada wants to put its weight behind?

This whole manufactured crisis is so insane, that it naturally raises questions in people’s mind.
Most people would like to have an explanation to the insanity they are witnessing. Why would the European Union suddenly decide to throw away the rule-books and let everybody in? Why couldn’t these people be registered in the refugee camps or at the borders of the EU before they were allowed in? Why were the borders thrown open? Why don’t we stop the boats from coming and risking thousands of lives every day?
None of it makes any sense and when things don’t make sense, people speculate.

Rocking Mr E exposes it as a crisis manufactured by the political left.
That leftists political parties are trying to take advantage of the situation is not a conspiracy theory. It is pretty much admitted. That they wish to grow the state bureaucracy is an obvious corollary.

But there are more exotic theories.
Soros wants to bankrupt the EU (and make money on it.) Like any good conspiracy theory, it is based on verifiable facts. Soros organizations are pouring money into the crisis setting the migrants on the road from Turkey with a detailed guide to the system to exploit.
Soros himself advocates “Rebuilding the Asylum System”, a centralization of national immigration policies in the hands of EU bureaucrats.

“The EU should provide €15,000 ($16,800) per asylum-seeker for each of the first two years to help cover housing, health care, and education costs – and to make accepting refugees more appealing to member states. It can raise these funds by issuing long-term bonds using its largely untapped AAA borrowing capacity, which will have the added benefit of providing a justified fiscal stimulus to the European economy.” (George Soros)

The EU power grab is a very popular theme and there seem to be a lot of evidence supporting it, not the least of which is the The Barcelona Declaration of 1995 outlining

Julian Assange claims that this crisis will be the excuse for the EU as a political entity to set a precedence using military force (against people smugglers in foreign jurisdictions). This crisis will supposedly lead to the establishment of an EU army.

Alex Jones sees it as another step toward a world government (@ 4:20 – “World government is officially here”) while some of his people on Infowars.com expose the political background of the crisis.

Pick whichever theory fits your personal taste, but I hope I managed to show you in my last few posts that immigration into the Western socialist welfare states is not a humanitarian, but a political issue. It should be treated as such.
Advocating for open immigration is just asking for more of the same corrupt, politicized and largely counterproductive policies we already have.
It is the system and the attitude toward it that should be changed, not the number of people that are let in.
Immigration should be free – free from the toxic political influence of the state and the statist parties.