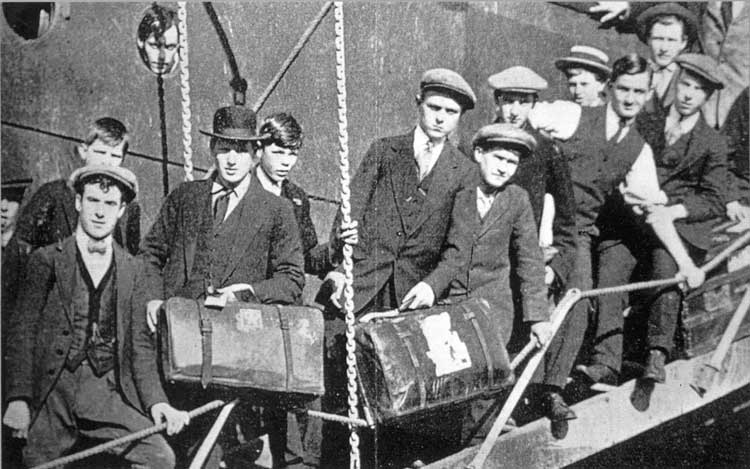 Considering the attention my post about immigration received I felt necessary to expand on the subject. It is an important one because it touches on a number of fundamental questions about the nature of liberty. I will discuss them in several parts, starting with my personal stories.

I am an immigrant myself. I was 27 when I came to Canada. As you may know, and if you don’t, you can read the details here, I was jailed by the communists when I was 19 years old. Part of my sentence was that for ten years starting with the completion of my prison sentence, I was not even allowed to apply to a university. The only university with no criminal background check was the University of the Communist Party of Hungary (if you want to know the details, ask!)

When I was in jail, I noticed that several of the jail guards were Greek. I learned that they took up the job as a means to citizenship. At the end of the civil war in Greece after World War II, large groups of Greek communists settled in the eastern bloc countries. They did not receive citizenship or any proper status. Their identity papers designated them as ‘Stateless.” Those who wanted citizenship had to accept highly undesirable jobs such as being prison guards.
Is it unreasonable from a state to expect a show of allegiance as a ‘cost’ of citizenship?

An even better example of this principle would be the case of my uncle. He left Hungary at the age of 16 during the last days of the Hungarian uprising against the Soviets. He ended up in France with quite a few Hungarians. All young immigrants were asked to join the French army which was in the middle of a major war in Algeria. My uncle declined, but when he applied for French citizenship later, his application was rejected. He was told that he wasn’t there when France needed him and so France is not there for him either. This refusal was one of his reasons to move to Canada.

My own immigration experience

I never aimed to be a ‘refugee’, but having been unjustly jailed for a political ‘crime’ by the communists, I was more entitled to claim that I am a political refugee than anybody else around me claiming that they are. The fantastic stories they invented made my actual 9 months in jail pale in comparison. It was explained to me that (at the time) Canada was not interested in political refugees, they only wanted qualified landed immigrants. In order to apply for a Canadian landed immigrant status, I had to apply for a refugee status in France. I got my Canadian papers before the French ones got processed.
My uncle sponsored me.

I married my first wife exactly three weeks before I got arrested in March 15th 1972.  My turning out to be a dangerous enemy of the state was bad news for her and eventually we got divorced. While I was in Paris waiting for my own Canadian papers, I learned from a friend that my ex was in London as a political refugee. Her claim was based on the fact that at some point she had been married to me. That was enough for her to become a political refugee in England.

After moving from Montreal to Toronto, I was working in a small French restaurant on Yonge Street. One of the dishwashers was a communist intellectual, a refugee from Chile. He despised me for leaving communism. He was an ideological warrior. He came to Canada to fight for the cause of communism in a less dangerous environment. When I asked him why didn’t he go to the USSR, he said “because there everything is perfect already.” He came here because he had a job to do. He was, of course, a convention refugee.

Somewhere in the eighties, sitting at a friend’s place I noticed an open letter on his coffee table with some pictures sticking out. I asked and was told that they are drawings and paintings of a young Hungarian artist who would desperately like to come to Canada. I found her work fascinating so I took it on myself to find five sponsors for her. I had an unfinished basement which I finished just for her. She lived with us for a few months then she found her own place and moved on. Eventually she married a Dutch artist she met while waiting for her Canadian papers and moved back to the Netherlands.
Apart of the cost of processing her application, she did not cost anything to the Canadian taxpayers.

In the nineties, I sponsored another person (from China), who also did not cost a penny to the Canadian taxpayers.

I had a buddy in Hungary with whom I worked in my first real job and in a few others as time went on. We shared a passion for theater. My interests changed, his remained. He could never maintain a job for more than a season, he was fired from all of them for some sort of scandal. When he ran out of places in Hungary, he decided to leave. He arrived here in 1982. His résumé was 80% confabulation, but then so are most résumés on the Canadian grant application market. He managed to get maybe one grant a year and living on welfare the rest of the time. His personality has not changed, so eventually the grant market dried up for him. He moved to Montreal where social services are apparently more generous than in Toronto. He directed a few plays before declaring, at the age of 50, that he is ready to retire. What he meant is that he will stop applying for grants and rely on welfare. Our political differences made us part ways around that time so I cannot say with certainty, but as far as I know he did not work in an honest job altogether more than a few months in the past 33 years.
He sees himself as an artist and considers welfare as something society owes him for his artistic genius. His words, not mine.

Then there are the gypsies

A couple of years ago, when Ezra Levant made some comments about the Hungarian Gypsy ‘refugees’ in Toronto, I sat down to write about them. To explain what and who they are. I would like to think that I know more about them than most. I was in foster care with them, I worked with them, I spent time in jail with them, I researched and interviewed them; yet after writing about 2,500 words, I gave up. Experiences are not transferable. Wherever they go, the gypsies are bad news. To understand how bad, you should watch these two BBC documentaries:
Britain’s Child Beggars (BBC Documentary) – YouTube
Gypsy Child Thieves (BBC Documentary) – YouTube
I gave up on trying to explain the gypsies because I realized that people who have no experience with them will not believe me and will not understand. It took a few years for Canada to realize that the majority of the gypsy refugee claimants were criminals. Not all, for sure, only two thirds of them have been caught and charged with some crime, but Canada wisely decided that these are not very good odds and changed policies to screen them much faster.

Why am I telling you this?

To show that the matter is not theoretical and my views on it were clearly influenced by my personal experiences. Being one myself, I know many immigrants. Over 90% of them fit the stereotypical image of the hard working immigrant coming here with a few dollars in his pocket and with hard work and perseverance creating a better life for himself.

But not all immigrants are good and it is reasonable to ask what the best way is to separate the wheat from the chaff. It is reasonable to ask what a good immigration policy is. A good policy should go beyond yes and no or just a quota. It is reasonable to ask for an active demonstration of allegiance, an expression of willingness to integrate. It also must be understood that government bureaucracies are not the best judges of character. The worst humiliation I ever suffered in my life was in the hands of a Canadian immigration officer in Paris who jumped up from his desk shouting at me in front of my girlfriend “Vous êtes un ZERO Monsieur, vous êtes un ZERO!” The same office happily embraced my petty criminal artist buddy and processed his application in half the time they did mine.

My personal experience seems to suggest that what makes the difference is the level of government involvement and the willingness to integrate. Those who did NOT get government help are more likely to make it than those who did. Those, on whom some demand is made integrate better than those who get accepted unconditionally.

….but that’s just my opinion. I may be wrong.

3 replies on “Immigration – My personal stories”