A facebook friend posted this picture on her timeline with the following comment:
“don’t stop at the photo, make an effort, read it all.” 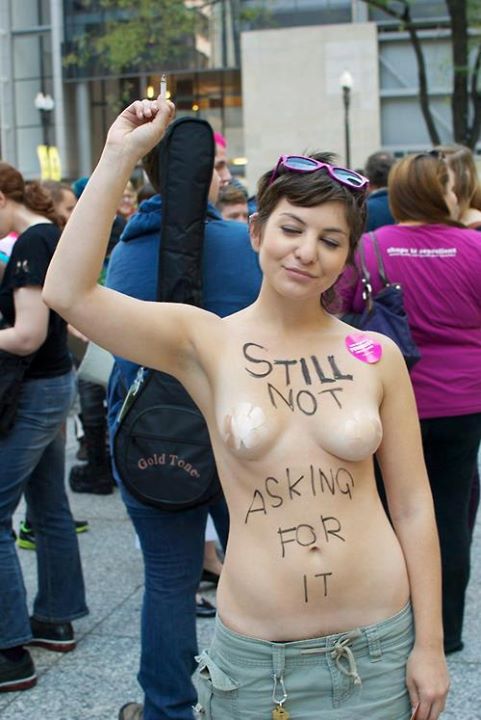 From the album: Timeline Photos
By Sebastian Bieniek

This photo was posted on STFU, Conservatives Tumblr page last night. The reason why I’m sharing it is not because of the photo itself (which is epic in it’s (sic) own right), but for the comments it generated.

Bravo.
(The photo was made by Nina D. Sheffield)

As I was looking at the picture I was wondering what she was thinking. With her closed eyes and the smug smirk on her face. Does she really think that she is brave doing this? Does she think that she is actually advancing a cause? If so, what would that cause be?

I also wondered where did the protest take place?  Who was she protesting against? Is there a rape epidemic amongst the obviously left-lib crowd she is standing in front of?
What kind of danger is she actually facing? Nobody around her seems to give a damn.

Her heroism obviously has its limits. No nipples. Is she afraid or shy to show them? Could it be that she is just calculating that this way the picture may be more acceptable to a wider range of publications?

Wouldn’t she get more attention pulling this stunt in, let’s say, Riyadh? With a male relative accompanying her, of course. Not only would she get more attention, she would get my admiration. But I should not be so demanding. I would be happy to see her pulling it off in Cairo. You know, Tahrir Square, where Lara Logan got her experience on the subject. That is a place where there IS something to protest. There are real places in this world where real rape is going on with very real perpetrators. I would find her protest daring even in some neighbourhoods of Oslo, Malmö, Marseille, just about anywhere outside the safe and comfy metro-sexual crowd she is surrounded with in this picture. I somehow doubt that she would do any of that. I doubt that she would have the courage to stand up to anybody anywhere. I doubt that she knows what she should stand up for. This picture is not a protest but self-promotion, advertising to the right crowd that she really, really belongs there and she really deserves the attention of the alpha males in the group. What? You think they don’t have them?

The Facebook post was inviting comments. What ticked me off about the picture is the smirk on her face. The obviously self-congratulating, self-satisfied arrogance plus the comments praising her for this daring achievement.

Still, I would have ignored it if it was not for this article of Mark Steyn about a woman awaiting her execution in Sudan.  The story is revolting in more ways than one. I shared the article just a day before this picture was posted urging everybody to propagate it. The story should be told, the life of this woman should be saved. I urge you to read and widely share the article.

The person posting the picture of the half-naked pinko-bimbo is providing me with a steady supply of petitions to sign about a whole range of feel-good causes. This one, the threat to the life of a real person, somehow did not catch her attention.

Standing up to Islam, the murderous sharia courts in third world theocracies and the culture of Muslim rape gangs in the Western world may turn out to be risky as someone may – horror of horrors – call you a racist. It is better to practice safe heroism where you stand up to advocate the core values of your group in a manner of contrarian posturing.

This whole thing, the celebration of the super-safe phony bravery while ignoring the harsh reality of real suffering of real victims of real violence is a sorry indictment of our infantile, navel-gazing culture.

And these are the people to whom we are supposed to sell the idea of freedom??

And now, seriously, read the Mark Steyn article and send it to everyone you know.