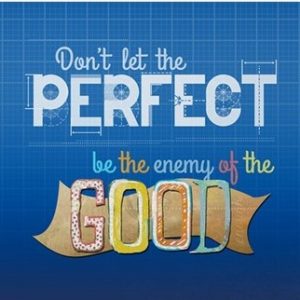 My former TL at Microsoft, a very personable guy from New Delhi, while we were already working for another company changed his tag line on his IM account to read: “Don’t let the perfect be the enemy of the good.”

It described his attitude perfectly. Solving problems by working around or ignoring them, declaring them ‘out of scope’ when it was possible to get away with it. I did not like it. Neither the statement, nor the attitude behind it.
Mine would be: if it is worth doing, it is worth doing well.
Of course I understand what he meant; of course I understand that sometimes we have to compromise, but giving up on aiming for perfection is a slippery slope. The good will very quickly become the good enough and how good is good enough is wide open to interpretation. Perfection is an unattainable absolute which is precisely why we have to aim for it. That is the only way to find the better and the best possible. Aiming for the good enough is aiming down and eventually going down with our standards and expectations.

On this last trip of ours it dawned on me that it could be the motto of India. Someone used the expression ‘crafty’ to describe Indians to me. Indeed they are. They fix things. They make things work.
Like this door. Priceless antique in a museum, but it needed a lock so they put it on it. 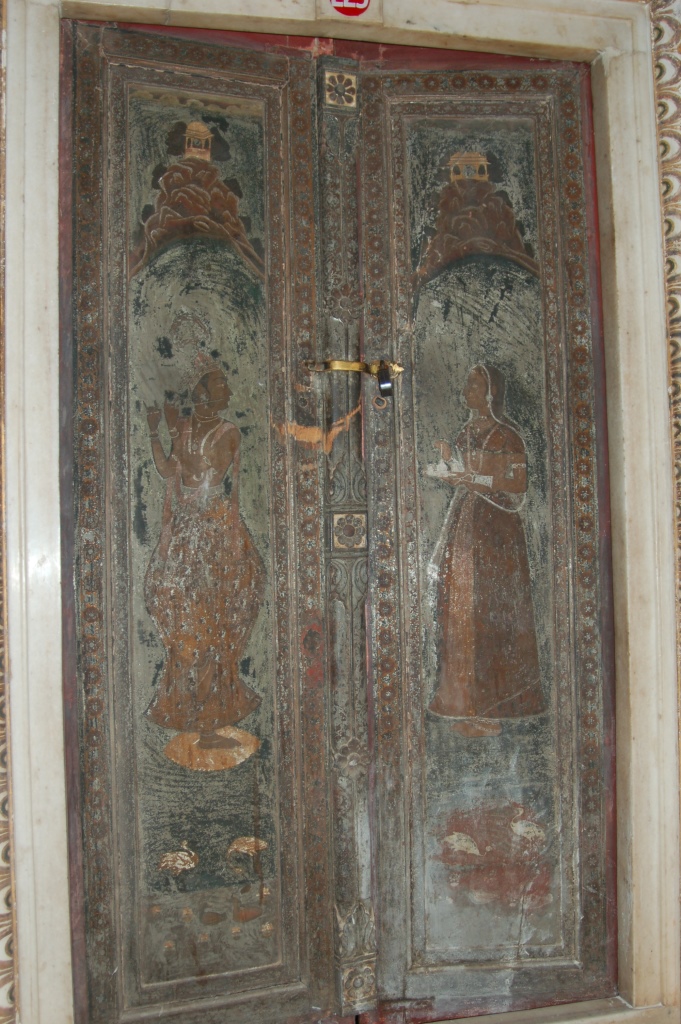 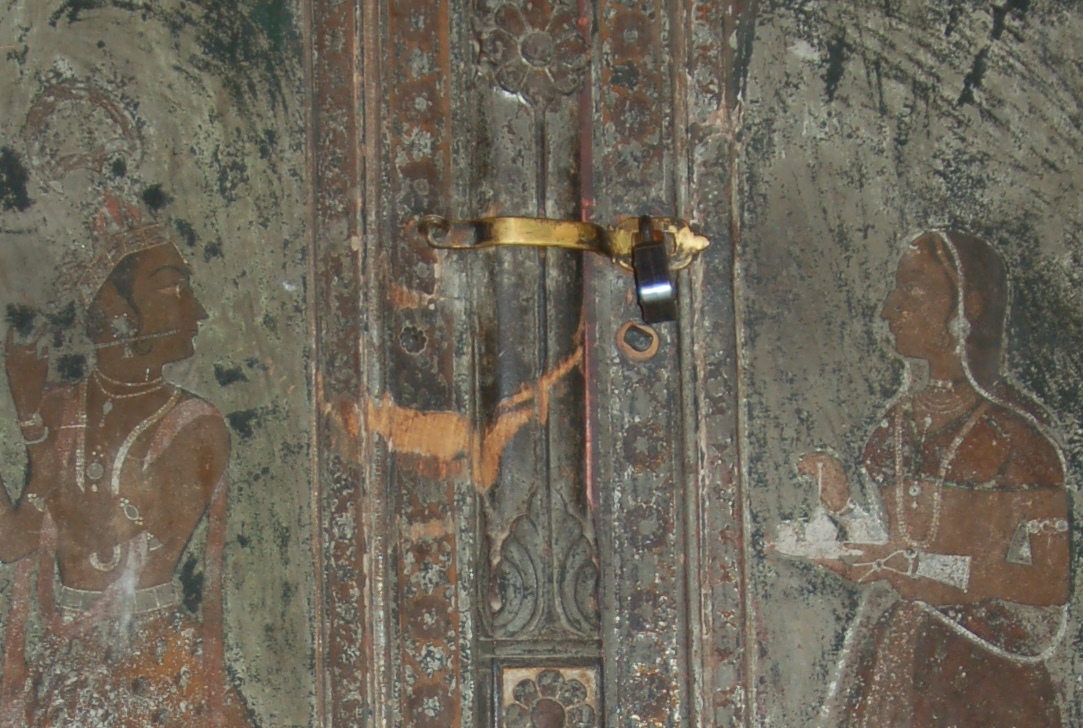 Indians are great at solving problems that would have been perfectly preventable with just a little planning, just a little forethought. Like the loading of these trucks: 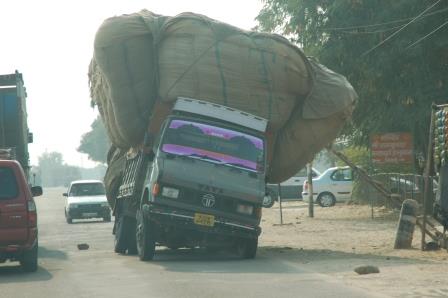 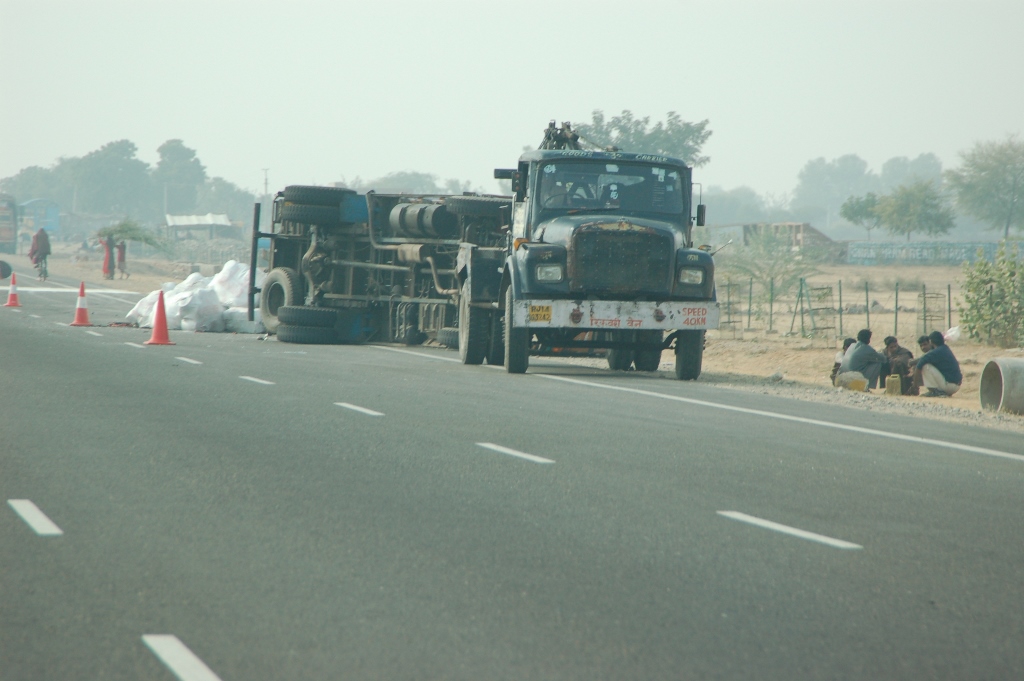 But why should we care? Why should we worry? I can see a number of reasons. If the wiring looks like this in a hotel lobby or a mosque: 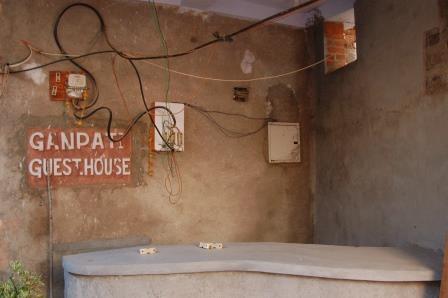 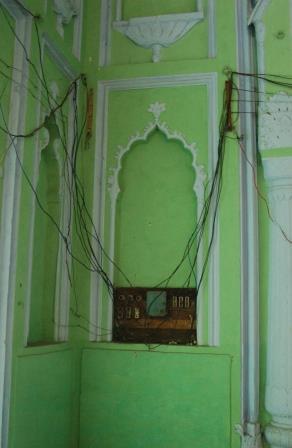 …….I think I can live with it, but can we afford a nuclear plant built with such attitude?
What is the definition of the good when it comes to somewhat more risky endeavors?
What is the definition of the good enough when it comes to deciding how many people you can cram into a sweatshop before the building collapses?
What if the attitude is exported? These following pictures were not taken in India. As we were driving home from Vancouver, we got to Calgary very late at night. Since we were told that the city is terribly busy and it is impossible to find a hotel room, we took a room in the first motel showing vacancy. The place was owned and run by a family of Indian immigrants. This is how our bathroom looked: 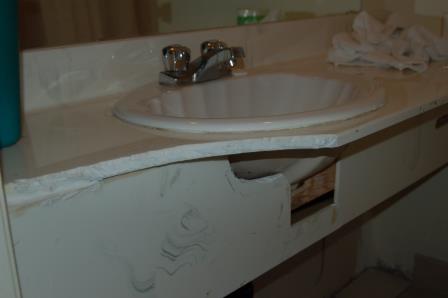 Please observe the principle at work. The countertop had to be hacked off so that the door can be opened. It isn’t exactly pretty, but it is working! Some perfectionists could point out the bad planning, but they just don’t understand that “you cannot not let the perfect be the enemy of the good.”  They made it work. On a market such as Calgary was at the time, the room was rentable. It was therefore good enough. This is how the fixtures looked: 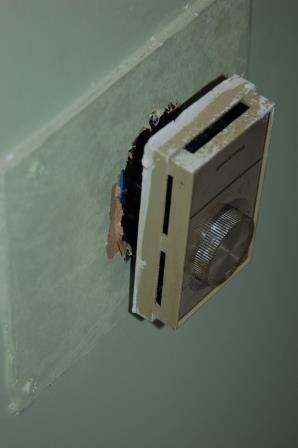 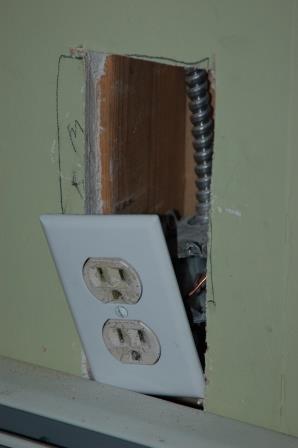 Again, they were working (I think, I did not need to and would not dare to try) and even if they weren’t, so what? There was at least one functioning light and what would you expect for 80.- Canadian dollars anyway?
A few years ago there was a little scandal in the GTA when it turned out that in Brampton, if you knew where to go, you were able to just buy yourself a perfectly legal driver’s license. The government staff selling them were – you would never guess – Indians. This kind of obvious corruption is relatively easy to catch. The corruption represented by, the “don’t let the perfect be the enemy of the good” attitude is not. It is a creeping change, a slow erosion of our standards and expectations.

My problem here is again the same as it was with the garbage. We cannot change it in India. Only Indians can. I don’t know whether it can be changed, I don’t know how long it would take to change it. What I do know is that we cannot and should not tolerate it here. Whenever we see such thing, we should stand up to say that this is not acceptable.

The Japanese are perfectionists. The Chinese can dedicate their lives to become the best at what they are doing. The Swiss are precise and punctual, the Germans are clean perfectionists, the British are reliable and consistent. Can a culture without deep roots in such ideals possibly move in that directions?
I have not yet seen performances like this or this with Indian children. The Indians are said to be survivors. Can they become more than that? Can they evolve instead of just absorbing cultural influences into their own immutable ways?

The examples above non-withstanding I do not want to suggest that Indian immigrants or any other group of immigrants is responsible for our changing standards. Unfortunately, anything seems to fit in perfectly with our changing zeitgeist of growing cultural and moral relativism but the two, the influences and our own weakening standards, add up to a destructive perfect storm in the making.

I gave up on asking questions in big chain book stores a long time ago. In the World’s Biggest Bookstore in particular, I was at some point convinced that they had a special work program for the mentally challenged. It is getting more and more difficult to find someone in any store who knows the products they are selling. It makes less and less sense to call for technical support on anything or to complain about slipping standards. The Steve Jobs style aggressive perfectionism is not the norm any more but a weird exception. I also don’t think that my ex-TL did anything more than articulating the general attitude and business culture of the company we were working for at the time.

In the end, the questions are always about our own culture. Can we stop its apparent degradation? Can we withstand the corrupting influences of other cultures? Do we have better things to offer?  Are we confident enough about their worth to offer them? Can we even define what makes them better than the alternatives?