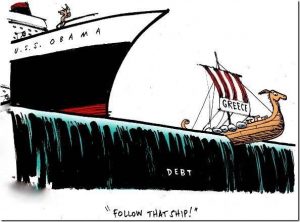 My friend from New York works for a credit rating agency. I would like to see her expert opinion about the financial prospect of an imaginary company.

I put these numbers together before we went to see you but I did not ask you because we had so many more pleasant things to talk about.

My question is not personal and not political; it is to the professional assessing credit risks.

Try to imagine a small company in the service industry. They have some real estate holdings and some equity in industrial companies that are not doing too well. Have some negligible intellectual property as well, but most of their income is from services.

The company is not doing too well. They have an unsecured credit line in the amount of $17 million that is maxed out. They are asking you to assess their credit risk because they need to increase their credit limit.

On top of their existing unsecured credit line, they also have contractual obligations to their clients in the form of annuities, but there are no reserve funds to cover it. All the money that has been entrusted on them for that purpose has already been spent. Some of their revenue is from contributions to the funds that they treat as general revenue. They are meeting their current obligations from their revenue and borrowed money, but there are looming changes as an increasing number of contributors are turning to regular withdrawals.

The management of the company is sharply divided over the actions that need to be taken to improve the company’s financial status.

Some argue for spending cuts, some for the renegotiation of the contracts behind the obligations, but the majority of management, including the CEO wants to keep borrowing to improve services. They are unconcerned about the apparent financial problems. There are no viable and practical ideas for either cutting of the expenses or for increasing revenue. Some shareholders suggested that the company could sell off some of its real estate holdings but the idea was rejected as it could not even cover two years’ worth of deficit.

The company is pretty much hostage to its vocal, demanding and well organized labour force which is vehemently opposed to any reform that would threaten their jobs.

The company is lucky to have a monopoly position over the services they provide and they are in the position to increase revenue, possibly even to cover current expenses but not even nearly enough to put a dent in the debt. Some in management argue that increasing their prices will not solve their problems as it will drive down their sales while also increasing their expenses.

The company is in the middle of a highly unpopular and very expensive product overhaul. It is the pet project of the CEO who is refusing to compromise on its ruinous costs.

Here are the numbers:

The main creditor of the company is a bank known for its shady deals and highly secretive accounting practices. There are some allegations of outright criminal activity such as printing funny money. Most other creditors are quietly walking away from this company’s debt so their exposure to the crooked bank is increasing. The company’s credit rating is good, the CEO loves to boast about it saying that this company never defaults on its obligations and so far they did not because they always managed to find some more credit to pay the bills with.

How would you rate the credit risk of this company?

I know that you will try to dismiss the question, but this is not a rhetorical one. I cannot imagine a bank that would give them more credit. If you would, I would love to see the business reasoning behind it. I am certain that the readers of this blog would like to see it too.

At some point you said the US will not go bankrupt because they can always print some more money.
I kept wondering ever since: was that the liberal democrat or the credit rating analyst talking?

To help you assess the credit risk of this particular company, here are some references:

The second page of this article offers some interesting statistics about the competitors of this company while this page offers up-to-date numbers about the company’s finances.