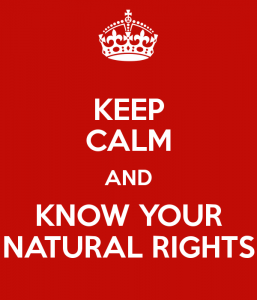 When I finished my second post about abortion, I promised two more on the subject.

Libertarians won’t like this, but I must declare that I do not believe in natural rights. There is absolutely nothing “natural” about rights. What we get from nature is an imperative, a drive to survive. Since we are both social and thinking animals, over a very, very long time of social and intellectual evolution we rose above the biological imperative and came to a general agreement on some basic rules to help the survival of our species.

Nothing we call ‘rights’ could exist without this basic agreement.
Calling a law natural is the same as calling it divine, trying to somehow remove it from the sphere of rational discussion. Calling a right ‘natural’ simply means that its proclaimer wishes to see it as universal and absolute.
These agreements, these rights are not final, not absolute and definitely not universal. They are culture specific, they can all have some valid exceptions and most of them are constant subjects of our social, political and legal discourse. And so they should be. There is no law, no moral code that could not or should not be a subject of discussion.

The contention of my argument here is that we cannot hope to create a good society if we do not have a clear understanding about the differences of the types of laws we have, their functions, problems and limitations. Much confusion results from the fact that we do not distinguish clearly between the different types of laws.

All of our rights and laws can be sorted into three broad categories: Individual rights, social agreements and individual or group privileges.

Individual rights are the most basic rights. They are what Locke called natural rights, what Hayek described as negative rights, what the US constitution defined as the right to “life, liberty and the pursuit of happiness” All of the basic human right belong to this category. The freedom of conscience, the freedom of speech, property rights including the right to your own person and to do with it what you please, the freedom of association, the freedom from aggression and the right to defend yourself from it, equality before the law, etc.

The focus of these rights is freedom. The essence of these laws is that they are ‘negative,’ meaning that they do not require any action from anybody else to exist. They have no positive burden of compliance. The only limitation of individual rights should be the individual rights of others.

Civil laws (Social agreements) are quite different. They are the laws regulating our everyday life, the laws that are supposed to make our interactions friction free. They are the contract laws, the civil codes, municipal by-laws, agreements about the rules of traffic, about democratic/political representation and the setup of governments, social agreements about behaviour, the treatment of the environment, our children, spouses and cute little critters that are at our mercy.

The focus of these laws is voluntary cooperation. The essence of these laws are democratic decision making, the rule of the majority. By their very nature these are positive laws you must obey as long as you wish to act and interact in a civil society.

These laws should never overrule individual rights and they should not be in conflict with them. All of these laws should be dependent on voluntary actions and they should all provide the possibility to walk away from them. Any group of people should be able to establish their own little community within a larger one where people drive on the other side of the road and have their own contract and family laws. These laws represent limitations on the actions you may want to take in a social context. None of the civil laws should violate individual rights.

Individual and group privileges are by far the most damaging, the most harmful type of laws.
They are the corporate and individual welfare laws, the labor laws, the banking laws, the protective tariffs and trade regulations, affirmative action and employment equity laws, the list is long, administering them represents about 90% of the “work” that governments in developed countries do.

The point of these privileges is coercion in the name of some greater good as envisioned by its champions and beneficiaries. The essence of these laws is that they impose a positive obligation on some members of society to provide resources to other members of society.
These are the laws that are defined as rights in modern constitutions, declarations of universal human rights and various incarnations of the second bill of rights. They invariably violate individual rights and civil laws while masquerading as the ultimate expressions democracy and a higher order of morality. They found their ultimate expressions in various forms of totalitarianism, their idealized manifestation in Rousseau’s Social Contract and Marx’s Communist Manifesto.

We should have none of these laws. They are divisive, coercive, unfair, unjust, corrupt and corrupting, counterproductive and immoral.

Why do we need to talk about this? What does it matter whether we call something a right, an agreement or a privilege? In the end they are all based on some sort of social consensus.

We always need to be clear about the nature of the laws we are talking about. Agreeing to exchange some goods is not the same kind of agreement as an agreement to cooperate to rob somebody else.
The categories of laws as I described them above have a clear hierarchy. The more basic a right is, the more intrinsic we consider its value, the consensus about it to be. Obfuscating the nature of a law is a tool used to gain support for it.

By now you must also wonder how does this all relate to abortion. Simply put: I do not consider the right to life a right at all. It belongs to the second class of laws, it is a social agreement about the treatment of the unborn.

I mentioned at the beginning that whatever rights we are talking about, they are not final, not absolute and not universal. A cannot remember ever coming across a debate about abortion rights or gay marriage in a Muslim country. The rights we are talking about are clearly not universal but culture specific. They are also not absolute. Even the most dedicated pro-lifer would stop arguing for not ending an extra-uterine pregnancy that would for sure kill the mother without any real chance for the survival of the embryo. The will of God is not ultimate. No matter how much he wants to punish the mother for only he knows what, we would allow a doctor to save the woman if he can.

The lines in this debate are drawn but the issue is far from being settled. The reason is ideology. The reason is propaganda, the manipulation of language, the drive to prevail, not to compromise.

Shall we ever reach a point when it will be a reasonable discussion?

2 replies on “Rights? What rights?”