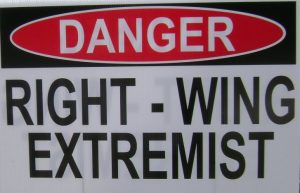 I hate it with passion when someone calls me a right-winger.
What the hell does that mean??
When I ask, the typical left winger (pun intended) response is accompanied with an uneasy chuckle and tellingly articulate definitions such as:

When I press, the description I usually get is some sort of amalgamation of three stereotypes:

The point is that there is never a definition, just fuzzy feelings, images and examples to illustrate these stereotypes.
When someone calls you a right-winger, that is an immediate dismissal of any possible argument and discussion, it is an implied and insinuated moral condemnation.
Anything that defines what right wing is is morally condemnable. Anything about it is expressed in negative, moralizing terms.
When you are called a right winger you are not simply categorized, you are judged and found morally wanting.

I know that my aversion to this particular expression is a little extreme. I have no problems talking about the political left and the political right as general, broad categories, but the “winger” part irritates me. There is something degrading about it. Something on the fringe, something extreme.
It is an insinuated insult.

It would be easy to dismiss it as simply stupid or sloppy, a shorthand to give your ideas the broadest possible category, but I cannot. I cannot because the expression is designed to be divisive. It is a term of us versus them, the bad guys versus the good guys.
Did you notice that while the word leftist is a widely used expression of our vocabulary, the word does not have an equivalent on the other side?
We have no rightists, only right wingers but we definitely have leftists but no left-wingers. Why the difference? Simple: the left owns the narrative, the definitions of the discourse.

Have you ever met a self-declared rightist, or better yet: a self-identified proud right winger? The people of the left may differentiate themselves as socialists, Marxist, liberals, progressives etc., but they all proudly wear the leftist designation. Leftists invariably see themselves as morally superior, smarter people on the right side of history. Being on the other side must mean that you are the opposite: a stupid, immoral troglodyte. It definitely does not mean that you may possibly have an argument worthy of consideration. Being a leftist is a proudly worn badge of honor, being identified as a right-winger is a derogatory label that others stick on you.

The expression ‘right-winger’ is used mostly by people who are not particularly well informed about politics but have vaguely leftist, statist sympathies. The expression is not a conversation starter, it is a conversation ender. It says a lot more about the people using it than about the person labeled by it. What it says is that “I don’t really have to pay attention to what you say, I can just dismiss it because being a ‘right winger’ you are obviously wrong, mean, and against progress.”

Any time someone calls me a “right-winger” I am tempted to say: yes, XYZ, I must be an asshole. Thank you for the respect and the compliment.

So for any of you who ever called me a ‘right-winger’, please remember: I am a LIBERTARIAN, and if you are too damn ignorant to know what that means, read up on it and stop insulting me if you do not want me to start returning the favour.

Reconquering the hijacked narrative is one of the most important battles in the war of ideas against the dark forces of the left-wingers.