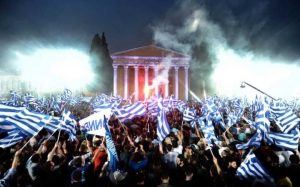 I did not think that this stupid election will hit me this hard. I was outright depressed and desperate as I watched America committing suicide in front of my eyes.
I believe we are at a pivotal moment in history.

What died there was American exceptionalism. America became ordinary. Just another welfare state. Another place of economic stagnation on the slow road to cultural suicide.

As I was watching the crowd celebrating, I couldn’t help thinking of Greece. That a few years from now, when there will be nobody willing to bail them out any more, these will be the same people rioting and pushing for more violent forms of class warfare.

Quite a few years back (1987) I happened to be in France during a student strike. We picked up a hitchhiker who was all into it. When I explained my position, he was stunned. It was not simply that he disagreed, he could not even conceive the argument that someone may see his position of violently demanding free stuff from the government as immoral. (You can find the argument here). What stuns me is the Greek’s and now the Americans’ apparent inability to understand that you cannot extend your credit indefinitely. That eventually, there will be a reckoning. That debt has to be paid. That free stuff is never free.

Isn’t this just democracy in action?

Indeed it is. Obama won. Not just the battle for the Presidency, but the war against the American idea.

I don’t want to criticize the Republican campaign because it seems that everybody made the same mistakes when interpreting the results of Obama’s policies.

We all treated the unemployment, the food stamps, the rising debt, the bankruptcies of environmental cronies as failures of his policies because we found it unacceptable to contemplate that they were their successes. It was the six trillion dollars that bought Obama his second term, and we cannot dismiss the idea that this was the plan all along. That it was not the failure of Keynes, but the victory of Saul Alinsky.  The road to socialism is an orderly march, left-right, left-right. The left step is the bribery, the right is the oppression. First giving you some ‘free’ stuff then taking away some freedom. Then repeat until all wealth and freedom is gone and the ‘general will’ reign supreme. Six trillion dollars can buy a lot of free stuff and can pay a lot of henchmen to enforce the new rules. But this is still all democracy. It is the system that makes it possible because short sighted selfish interest will always override moral principles and politicians who can recognise this have a natural advantage. Democracy is the natural system of statists because democracy is biased toward activist governments. Constitutional republicanism can only be an option as long as it can stay vigilant and defends itself from encroachments from the statists, as long as it can protect freedom from democracy. The only principled politician, the only defender of freedom and the constitution in this election was Ron Paul whom the politicking centre of the Republican Party did not find palatable enough for the nomination.

So what are the next steps for democrats in the US in general and for this president in particular?

Keep creating more dependency and poverty for votes while increasing the size of the government apparatus for more power. The poor are Obama’s mob, the unions are his henchmen. These elements were already in place for the first term and will get only stronger in the second.

From bribery through coercion to outright usurpation Obama used every tool possible to get power away from the states. He will keep doing that using federal grants implemented by members of his favoured national and international Unions.

Getting a blow-job in the oval office is a joke compared to some Obama actions that would warrant impeachment yet Clinton was dragged in front of Congress for a private indiscretion while Obama got away with serious violations of the constitution.

Am I paranoid? The seeds of all of the above has been sown and the re-election of Obama is proof that the shoots are out of the ground.  By the time he will leave office, the US will be unrecognizable. America may get a better president, but the precedent has been set to ignore the constitution, to redefine the balance of power between the three branches, to use the money of the productive half of the population to buy the votes of the other. Not only will the temptation be too hard to resist, but even the most principled future president will have to contend with the difficulties presented by an entrenched, unmovable, oversized and militant bureaucracy. America will never be the same.

I wish nothing more than to be proven wrong.

A stormy interlude of bitter Schadenfreude

On November 8th, just two days after the election, a new storm hit the East Coast. Knocked out electricity for 60 thousand people. Electricity that has been restored just one day before. As a response to the storm, FEMA closed its offices in New Jersey. Yes, the Federal Emergency Management Administration decided that the safety of its unionized workers is more important than its mission to help people in an emergencies. People are angry. They feel betrayed.

After Sandy hit, when Obama was touring the disaster sites for photo-ops, the New York Times ran an article titled A Big Storm Requires Big Government.
All the while FEMA was turning away emergency workers, trained electricians who drove all the way from Alabama to help, because they were not unionized.
All the while Obama was running attack ads on Romney criticising FEMA sometimes in the past for its incompetence. (On FEMA’s performance with Katrina, I highly recommend Lew Rockwell’s speech at the Mises Institute (or the same on Youtube))

At what point can we stop feeling sorry for them to shout into their face: YOU DESERVE THE ‘HELP’ YOU GOT! YOU VOTED FOR IT!

But the real question should be: what did the rest of us do to deserve it?

3 replies on “Welcome to the Big Fat Greek Revolution!”