◀What it means to be an immigrant
Do not believe me▶ 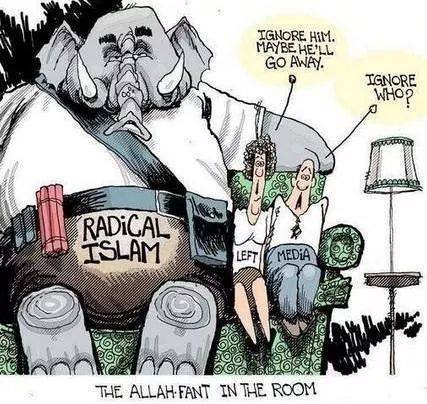 I saw a documentary the other day “My brother, the islamist” raising questions without offering answers.
It is not a remarkable documentary, but it is worth watching. It starts as a puzzle and ends as one. We can see what is happening, but we are not given much help to understand why.

I saw several short Youtube videos about Sweden, also recalling a Pat Condell commentary on it. I will not pick any video; just search Youtube for Islam in Sweden to get an idea what Muslims are doing to it.
Then I watched parts of Barack Hussein Obama’s and Mohamed Morsi’s UN speeches.

All of this (especially the documentary) left me with a number of questions:

What is the secret of the success of Islam?
What is the appeal? Why would apparently normal people convert to such an intolerant faith?
I had some nagging questions as well, such as what do these people live on? Who is paying their rent or buy the dates to break the Ramadan fast with?
Why is the political left so cozy with Islam? Why are they accommodating Islam which openly advocates the kind of bigotry they spent the last century fighting against?
Why would liberal democracies tolerate the intolerance that Islam not only represents but puts into practice in the very midst of their permissive societies?

Americans are very proud of their freedoms and their ‘way of life’. Then how can we, how can they explain that after spending years in America, Muslims return to their homes believing more firmly in the superiority of their own. Mohamed Morsi and a previous figurehead of the Muslim Brotherhood Sayyid Qtub have both spent several years living in the USA before returning home as hard core Islamists. What are the Americans missing? What is missing in America?

While I wouldn’t claim that I have the answers, it may help us to understand the problem a little better if we examine them in the light of three concurrent pathologies.

The pathology of liberal democracies

In Johnson’s view, the moment we started sliding off the cliff was the one when Einstein’s general theory of relativity was proven. It started a century of moral decline based on moral relativism. The last phase in the development of this relativism is the Foucault–Derida–Lacan post-modernist deconstructionism that is the running intellectual fashion in the liberal art faculties of Universities around the developed world.

The decline started with the best of intentions but today liberal democracies are both morally and ideologically bankrupt. (The financial bankruptcy is just a symptom) We effectively liberated and relativized ourselves into a corner.
The last one hundred years is a history of going from liberty to libertine breaking taboos and limitations on individual freedom. The problem is not that we got rid of the taboos, but that we do not know how to stop the process.

Once you become an activist of anything, it is very difficult to stop. Once you get rid of the sodomy laws and give legal recognition to civil unions, where do you stop? We are already promoting the virtues of homosexuality in kindergarten. Once you got the power to vote and burned the bras, where do you stop? We are already forcing religious institutions to pay for abortions and contraception.

Political correctness is just an overshot of out of control liberalism.

What was once licentious now has a license with the full protection of the power of the state.  Every cause for some sort of liberation turned into a quest for a special privilege, special advantage, some sort of special interest represented by a class of people who are not only dedicated to the cause but also fully dependent on it for their livelihood. There are no real injustices and real discrimination except for the reverse ones created by the process that got rid of the problem but still keeps looking for it.

Liberalism ran out of victims as it created an entrenched class of professionals to look for more.

Social justice, multiculturalism, the social safety nets made liberal democracies defenseless. The parasites are eating them alive and they do not know how to stand up, how to stop it without renouncing their most sacred believes and principles.
The hallmarks of western liberal institutions are lack of purpose, uncertainty, doubt and guilt demonstrating themselves in moral cowardliness, extreme permissiveness and sometimes outright self-flagellation.

Liberalism is in a trap. It ended up being an impotent system without direction, without faith in anything including itself. A system with no vigor or staying power, no positive ideology, a system where ‘anything goes’ is the ultimate value statement.
There seem to be no way out and no real alternative.

The pathology of Islam

In the book mentioned above, Paul Johnson also introduces a notion that he attributes to both the right  and the left, both national and international socialism. What in his opinion the Nazis and communists had in common was the “Will to power”

Islam is without a doubt the most primitive religion in existence today which paradoxically may be its greatest advantage. Its simplicity is unparalleled. It does not have much of a cosmology, no mysticism to speak of and its morality can be summed up in three words: obey or die. It is bloody, intolerant, destructive, parasitic and oppressive, but it has a will. It has a purpose.  A goal. A brutal and primitive, but easy to understand morality.  It will likely destroy our entire civilization possibly taking half of humanity with it but it has some masculine vigor. Its shameless, doubt-free naked intolerance can appeal to those who are lost in the wishy-washy uncertainties of the liberal multi-culti world. Islam appeals to the disenfranchised, to the ones who are seeking the kind of moral order, the kind of moral guidance, the kind of certitude that liberal democracies and their institutions are both unable and unwilling to offer.

Islam projects power. The will to kill, the will to win at any cost, without doubts, regrets and hesitation. It is the very intolerance that can be most appealing to those who feel lost. There is nothing in the liberal western world today that has sense of purpose, direction and destiny in the way Islam does. They may take us all to hell, but they at least know where they are going.

Islam is also in a trap. They cannot stop their jihad; they have to conquer the world. They have to kill the Jews. As long as the Jews are around, there is living proof that not Muslims, but the Jews are the chosen people of God. They are immensely more successful than the Muslims. They are smarter, richer, more accomplished and happier.  There is no contest. Just like in the times of Mohamed, the source of Islam’s hatred is naked envy. Their attitude towards the west isn’t much better. As long as western civilization is around, it also makes Muslims look like losers.
For Islam, the caliphate is an unavoidable imperative.

The pathology of the left

The political left is probably the biggest beneficiary of the demise of liberal democracy. The distributor class and the warriors of various liberal causes came mostly from the left; they are the maintainers and direct beneficiaries of the processes that will eventually bring the system down.

The left also has some serious problems.

Just like the Muslims, when we examine their history and accomplishments, they look bad when compared to the alternatives.

The wall fell, the communist systems died yet there is a world-wide communist movement.
The new world order, the demands for global governance is the leftist version of the caliphate. The reasons to call for it are the same. Every single attempt to implement communism ends in a colossal failure. The only way to cover up the failures is forcing everybody on the road so that there will be no comparison.

The left blames the failures of liberalism on not going far enough, on not doing enough of what caused the problems in the first place: the welfare state, ‘social justice’, redistribution. The only logical end to their demands is full-fledged global communism.

These three pathologies are feeding on and reinforcing each other.

The liberals have nothing left to liberate and nothing to stop them from continuing into extremes, the leftists are doing the double down with a pair of twos and the only viable future for Islam is the elimination of any alternatives.

Since liberal democracy is the common enemy, and the enemy of my enemy is my friend, the totalitarian left and the Islamists are natural allies.

Every little victory of Islam or the radical left brings us one step closer to our collective demise.

Liberal democracy, ‘the rule of law,’ ‘the American way of life’ is NOT going to save us.

4 replies on “On the crossroads of pathologies”