◀Isn't it time to get offended?
On the crossroads of pathologies▶ 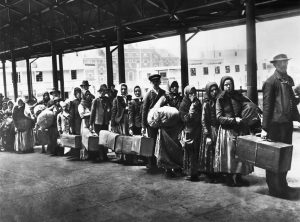 I am an immigrant to Canada. I escaped communist Hungary because I did not want to live in a Communist country. I detested the religion-like ideology. I DID NOT come to Canada for a larger slice of bread, I came here for freedom. Definitely not to export communism.

I came here, because I value the Anglo-Saxon culture and the freedoms it provides.
(Plus the beauty of the Country) I could go into more details, but I will do that at another time.

Shortly after I came, I was working in a restaurant where one of the dishwashers was a Chilean communist refugee. He was here, he said, to keep fighting for the cause. He looked at me with disgust for being a traitor, for being someone who rejected all the amazing things communists did for the proletariat. I asked him why he didn’t go to the Soviet Union. Because there, he said, everything is perfect; he would have nothing to fight for.

I think Canadians would be well advised to take note that there are three basic types of immigrants coming into this country: those seeking freedom and opportunity, those who seek to destroy our culture and society and those who just want to take advantage of our generosity. Only the first of these three types should be welcome, and we should find ways to weed out the other two.

Unfortunately, the post-modernist, relativist ideology of multiculturalism does not make it easy.
In our effort to accommodate and respect other cultures we are embracing cultures and people who are fundamentally hostile to the values of a liberal democracy.

My message to new immigrants (especially to the ones with the Islamic persuasion):

Being a Canadian means to espouse Canadian values such as Individual freedom and responsibility, equality, respect for the law, tolerance, freedom of religion and freedom of speech – among others. You cannot call yourself a Canadian until you really understand what they mean.

…. and if you do not want to call yourself a Canadian,
then what the hell are you doing here????

I have to confess, I have no idea how many Muslims living in Canada today could pass the above test.
I fear it is not many because if they can call themselves Canadian it is doubtful that they could also call themselves Muslims.