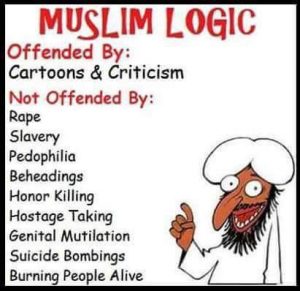 Coming home from our vacation we were driving the 401 from Montreal to Toronto. We ran into a bunch of Muslims twice. The forward pointing bearded types who always look angry.
At the time of the second encounter the sun was about to set. The En-Route place was not too busy, but it wasn’t exactly empty either. The weather was nice, there was even a grassy area outside but these Muslims were looking for a place inside for their praying. They found a corner with a view, pushed some chairs around to make room for their carpets and started their praying.

There was nothing spiritual, humble, or submissive about it, it was an obnoxious, into your face, insolent affront. Asserting themselves, pushing the boundaries, looking for a conflict and ultimately a foothold.

Religious accommodation can very quickly become a special privilege. Could you picture a Christian minister starting preaching or a catholic priest delivering a service or a bunch of Hindus chanting in a public restaurant? Buddhists meditating or Sikhs handing out free food to the needy? Of course not. None of the other faiths have the aggressive assertiveness of Islam. They could have easily done their praying outside, but that was not the point. This was not about their faith, about a personal moment with their God, it was about conquest. Conquering another little corner of Canadian Public space, another tiny plot for the land of Islam, a “Ribat” that all Muslims are then obliged to defend. These Muslims were begging for a confrontation. I did not wait out the whole show, but I am willing to bet that they did not get it. I will not be surprised seeing this scene again En Route to Montreal.

I could start musing about the nature of public space and a libertarian analysis of what could or should be allowed in it, but this is not about philosophy. This is personal.

I am writing this as the world is ablaze with Muslim indignation. Muslims are offended and do what Muslims always do: rioting, destruction and butchering of the innocent, throwing in a few fatwas on their non-violent critics for good measure. They share the believes of American liberals, they would never let a good offense go to waste.

I am writing this because I am also full of indignation.
I am offended by Muslims in more ways than I can say, but let me try anyway:

I was offended by the scene, and the ones like it, described above. I am offended by the demands for special religious accommodation. The arrogant assumption that Muslims in this secular society deserve more special accommodation than any other religion or group of people.

I am offended by the sight of women in burkas or wearing niqabs. It is an insult to me as man because it sends a clear message of their assumptions about me. I understand that in some Muslim countries they have reasons to be afraid, that they would be raped and maybe even executed for being raped if they complained. Apparently, Muslim men have problems controlling their sexual urges. I get it! I do understand, but I am not one of them. Canada is a civilized country but the message these dresses send is that they don’t think that we are any better. Any time I see them I have an urge to walk up to them to say:

THIS IS CANADA! You are not in the middle ages anymore!  We are NOT RAPISTS; we are Canadians! You are safe here. You do not have to cover up to protect yourself!

I am offended by Halal, the cruel, inhuman, ritualistic slaughter of animals. I have a Hindu friend who became vegetarian after witnessing slaughter in a Muslim butcher shop. The point of halal butchering is to see the suffering, the fear, to see death. We have humane ways of killing animals with much higher health standards than what the Muslims claim their savage methods provide.

I am deeply offended by the beheading and stoning videos all over Youtube.

The first time I saw one I was so disturbed by the sight that I felt sick for two days. I never watched another one to its conclusion.

Muslims are demanding youtube to remove a poorly done enactment of Mohamed’s life but all of them seem to be fine with real life depictions of butchering people for the heinous crime of THINKING!
In the video I saw the men who butchered a Turkish (Muslim) truck driver were shouting God is Great!
To me, THIS IS ISLAM, and no amount of talk about the intricate subtleties of the Arabic language or the supposedly sublime beauty of an Azaan can counteract it.
Not simply the fact that they execute people for reasons no civilized people would consider an offense, but the savagery they are doing it with and the pleasure they seem to take in doing it. The religious affirmation they are getting from it.
Islam is in the faces distorted by anger and hatred declaring the greatness of their god. They revel in their cruelty. Savage cruelty is the glory of their god.

I am offended by the pretend offenses when there are so many real problems to be offended about. Butchering people in front of a camera is not in the same league as the printing of some stupid cartoon or making a stupid movie.

I am offended by Lawfare, the way Muslims abuse our legal system to get special accommodation.

I am offended by Islam’s treatment of women. The separation, the subjugation, their status. The fact that there are “scholars” discussing the proper way to beat a woman.   And more….  And more…. And more

I am offended by the practice of genital mutilation. The only thing that offends me more is that some western nations are even assisting this barbaric ritual, excusing themselves saying that it is better that it is done in a sterile environment than in a back alley with a rusty knife.

I am offended by the direct and very explicit threat that I will be ruled by intolerant savages who wish to subjugate and oppress me.

Why shouldn’t I be offended?

Why should my offense count any less than anybody else’s? Everything I listed above is a real offense, real threat, real harm, real danger, real suffering. Every offense the Muslims have is a manufactured, imaginary one.
So in the end the only question to my fellow libertarians is:

When I see libertarians sitting in their little cocoons of ideology ignoring a cultural threat that is a more direct threat to their ideals than anything they squabble with, I must wonder what world they are living in.  After the fall of Mengistu, I read serious discussions about the new libertarian world emerging in Ethiopia. Until radical Islam filled the vacuum, but I digress.

I do not like to write about this subject. There are many far more interesting issues that I would like to discuss, but when I witness Muslims in action in my own personal world, when I see what is happening  in the world, I most wonder where is everybody else? Where are the decent people? When will they wake up? When will they stand up?

I am not seeking conflicts, but they seem to find me the moment I turn on my TV or step out of the house. We are under attack. I don’t want to go after the Muslims, but shouldn’t we do something when they are coming after us?

I hope it is clear, I hope it is understood that my points are not about the Quran or about any particular Muslim.
The Quran is what it is. May be Holy to those who believe, amusing or alarming to those who don’t.

There are many excellent books taking it apart, I am not going to get into it. (in an upcoming post I will give you a list of resources)
I know personally about two douzen Muslims. Some I like, some I don’t, some I trust, some I don’t, some I outright respect. Can I picture any of them with a butcher knife or a stone in his hand standing over an apostate or an adulteress? Only one I can, the rest I cannot. Can I picture any of them standing up against the barbarity of their religion? Not one.

3 replies on “Isn’t it time to get offended?”