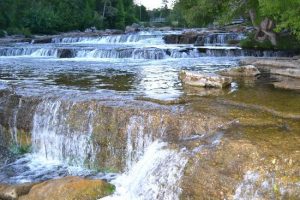 I spent the Canada day long weekend on the Bruce peninsula. Some friends have a trailer there in a park next to a nice inner lake. It advertises itself as a ‘family’ camp, a place where you can go with small children. It is indeed a very quiet, very friendly place. Since we were around, we stopped there to see them.

The peace of the place was seriously disturbed last year when a transvestite inherited or bought (the details are not clear but do not really matter) a trailer there. According to our friend, if there is such a thing as the land of the hicks, this is it. But he-she-it likes the place. The place does not reciprocate. It is not just the fact that he is a transvestite, not just the look, but mainly the behavior. How he-she-it flaunts it. On the top of it, he (I can’t keep up with the gender bull-speak) is obnoxious and in constant need of attention. The owners of the campground tried to reason with him and asked him to leave. His feelings are of course hurt so he is trying to sell: 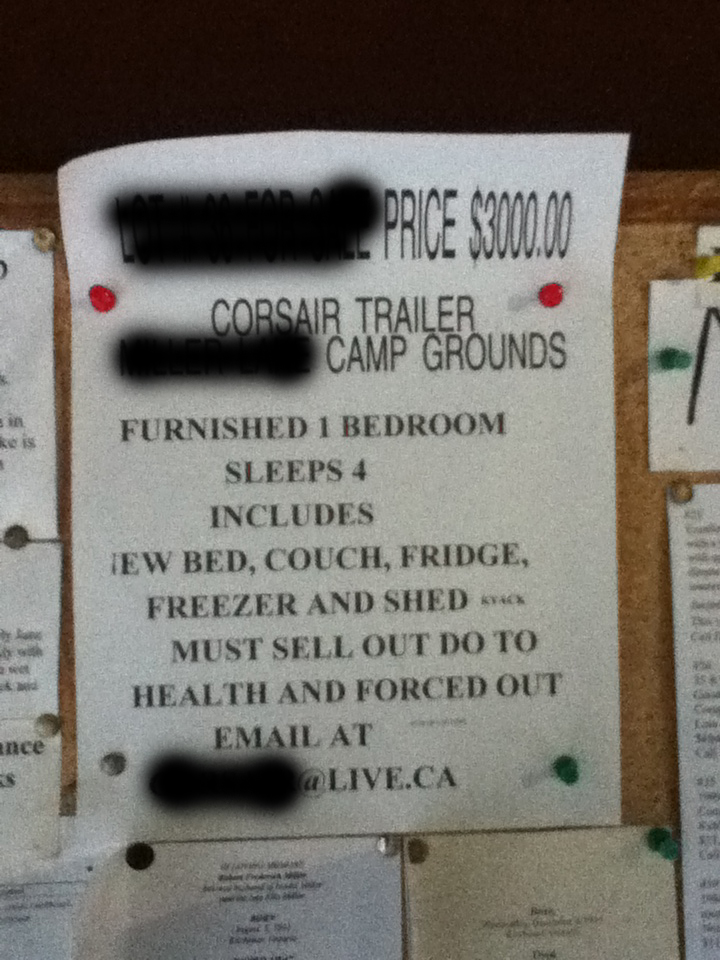 What was he thinking? What was he expecting? Outreach? Does he see himself as a pioneer braving the land of intolerance trying to shock the inhabitants into acceptance? He was asked already last year. He is still there and from the look of it he may still be there next year. The tactic may work. He is slowly getting to the village fool status which is a form of acceptance.  His biggest problem at this point, I think, is the behaviour, not the orientation.

This was the summer’s busiest weekend, the camp site was full; we rented a cottage somewhere else, next to a restaurant that was there even before we got to Canada over thirty years ago. At some point we were thinking of buying it. It was a very popular, very busy place then, but the numbers did not work out for us. It is for sale again. The owner is an aging hippy Swiss artist. His orientation is not as obvious as the trailer transvestite’s, but clearly recognizable. He is trying to sell, because the place is not as busy as it used to be, even though it is still the only place around in about twenty miles. Somehow the patrons are not as loyal as he hoped before buying the place. This is him, showing his Swiss-Canadian Pride on Canada day: 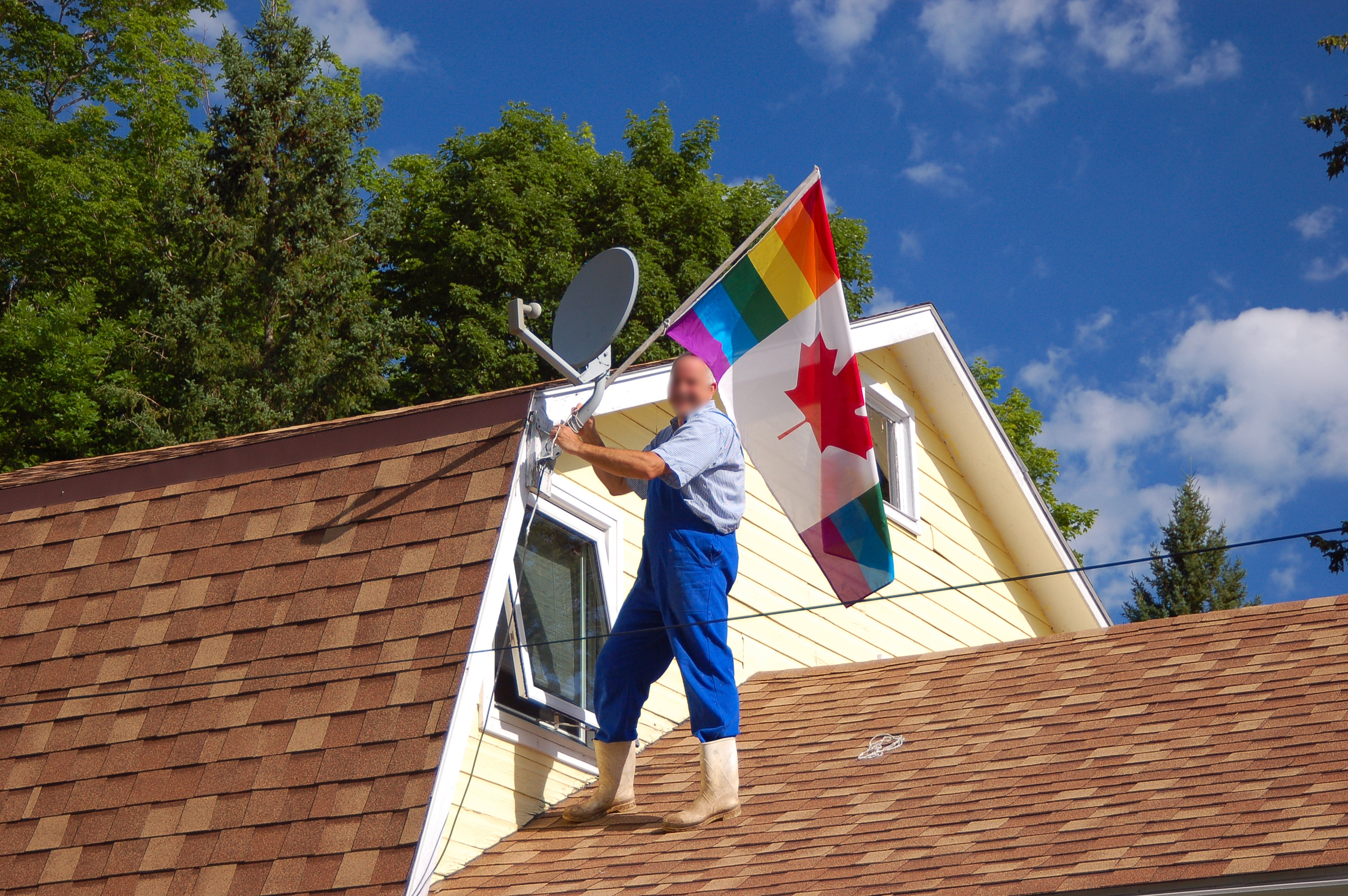 Again, I can ask, what was he thinking? Is he another fearless pioneer? I don’t mind, but can we fault anybody who does just enough to stop patronizing the establishment? He will never be tarred and feathered or Allah forbids, stoned, but one must wonder about his expectations.

All of this so far was just mildly amusing. My shock came when we stopped at Sauble falls. We’ve been to the peninsula many times, but somehow we never stopped there before.

This is what we found: 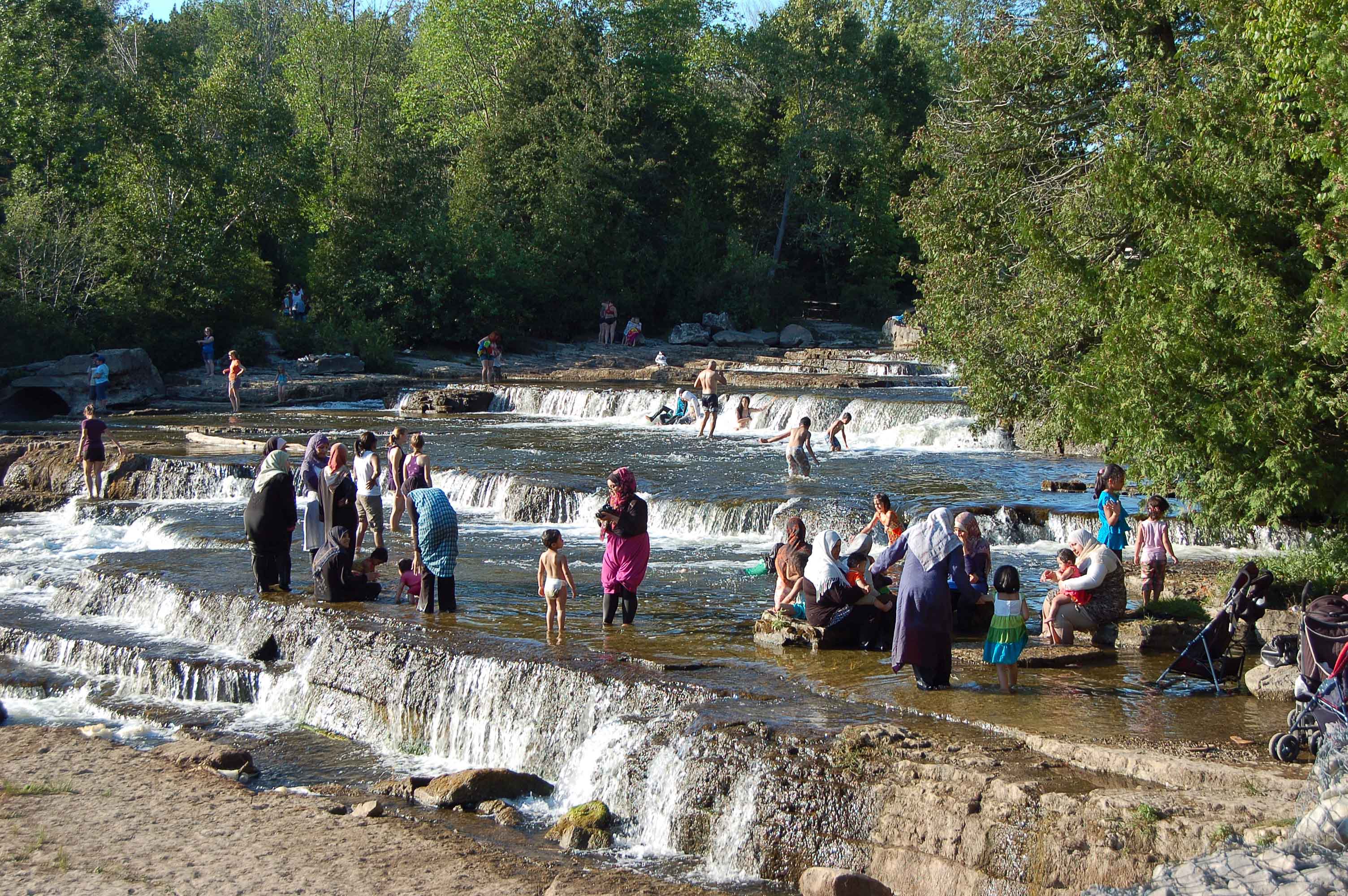 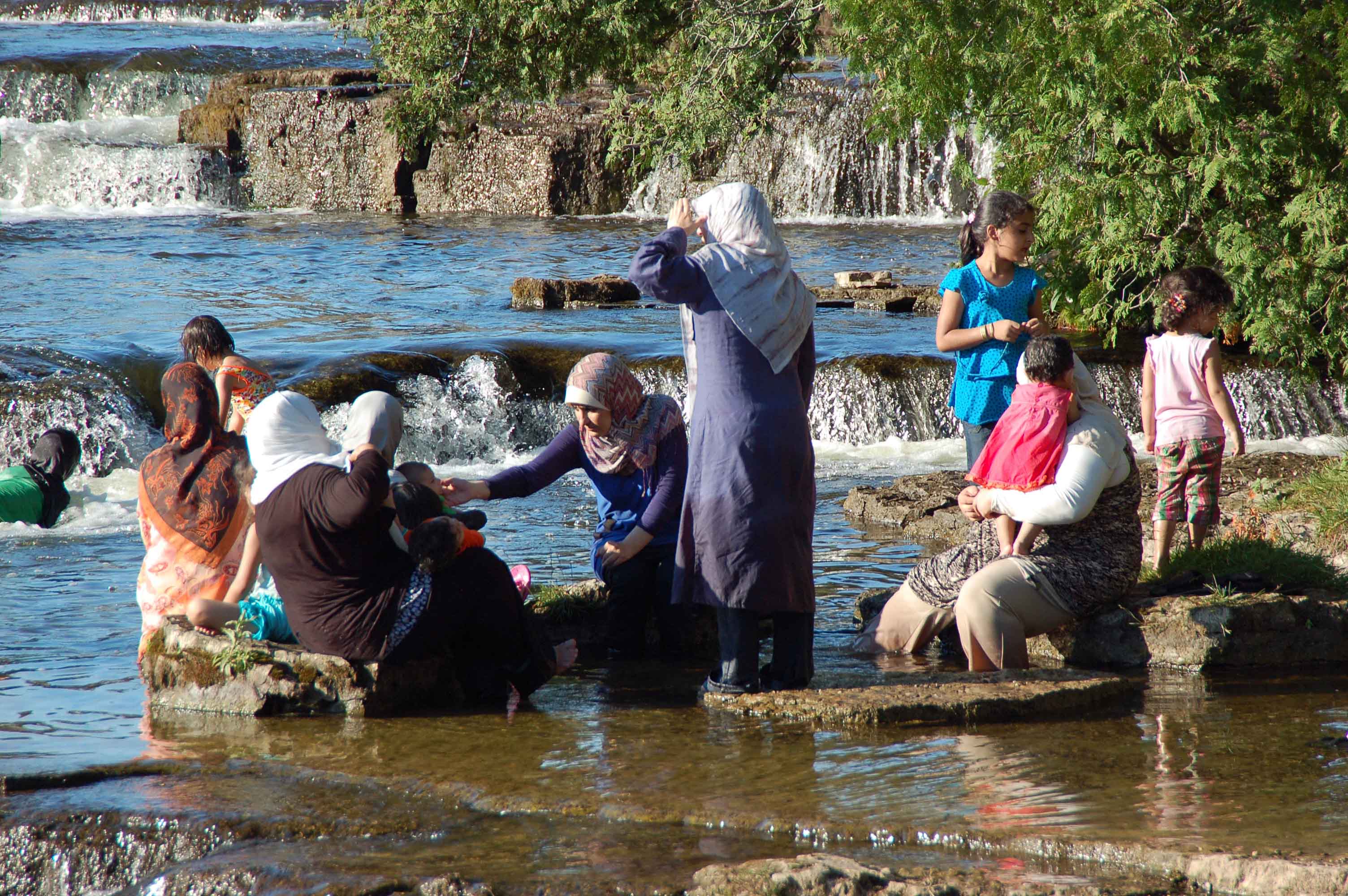 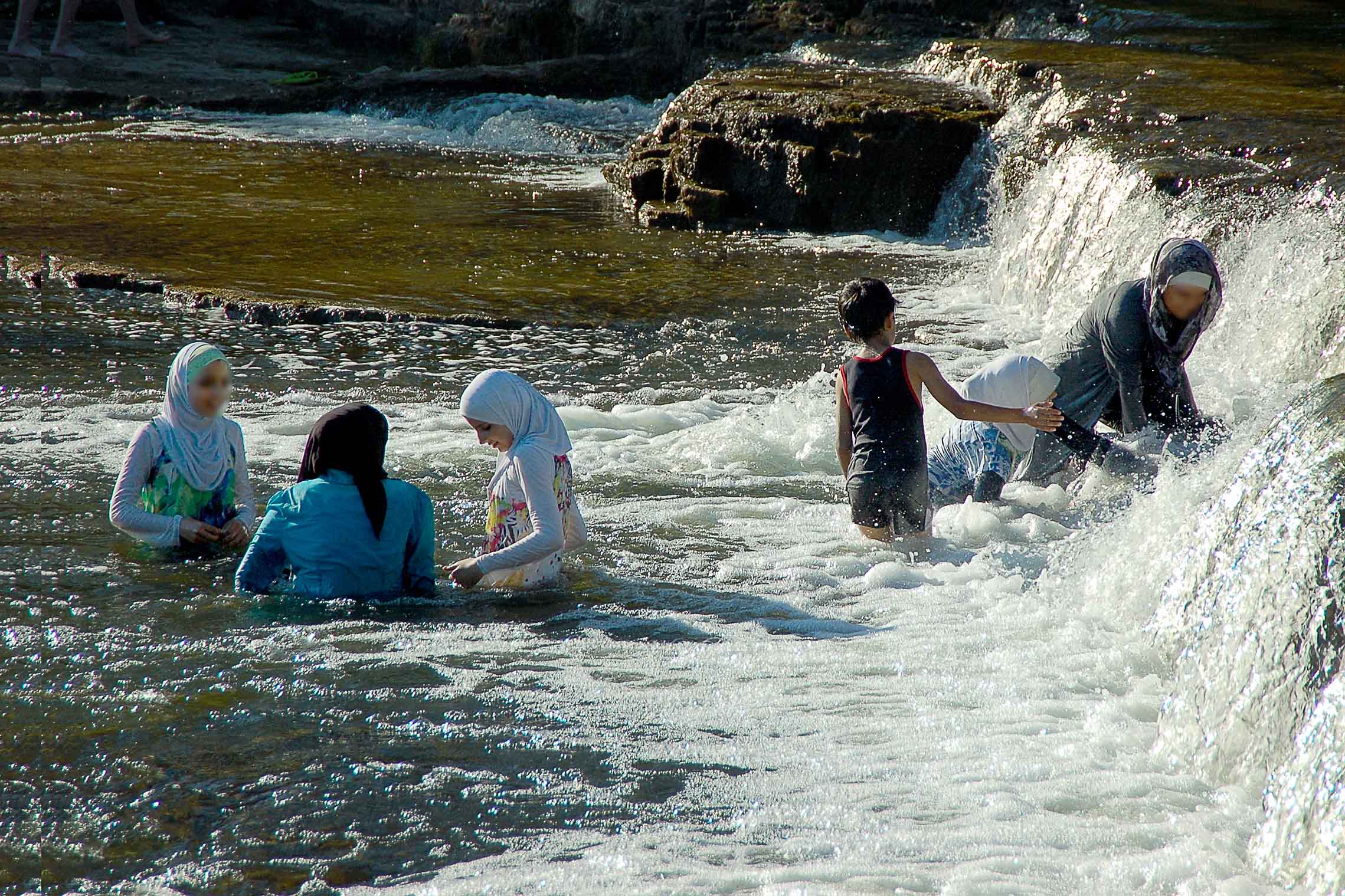 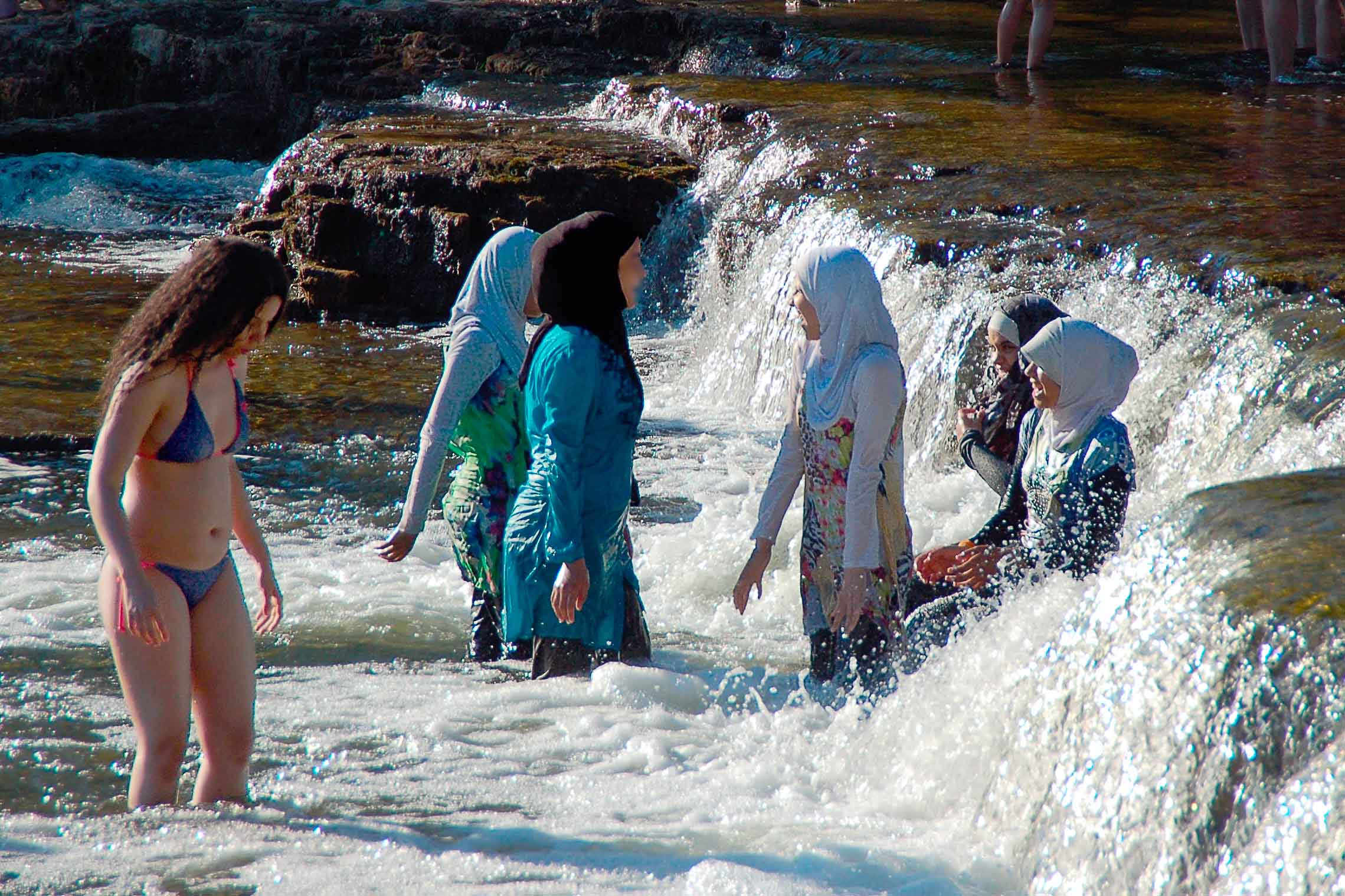 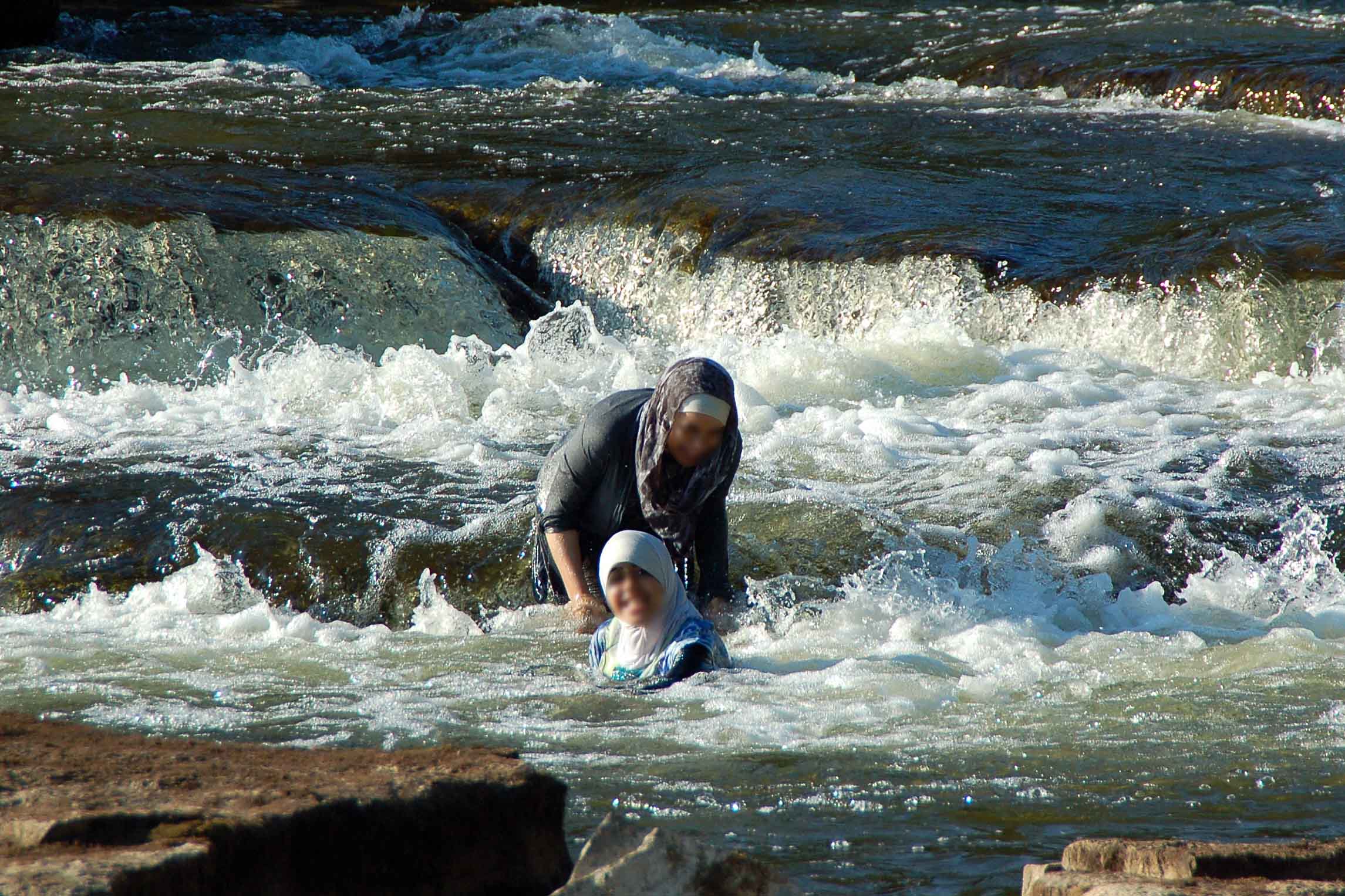 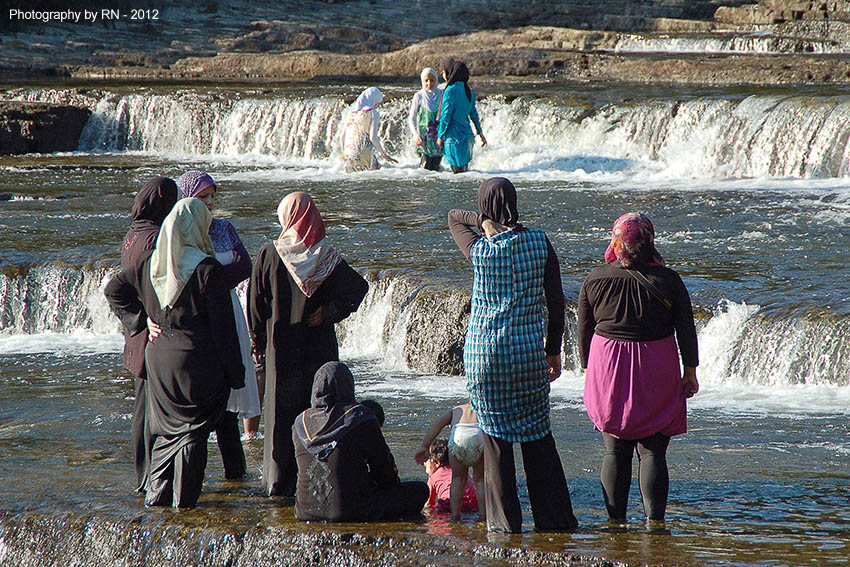 I was taken aback by the sight. This was a hot day in July. The majority of the people at and in the falls were Muslim women with children. Lots of children. No man.

As I was looking at the bikini girl getting ready to pose for her boyfriend in the pretty waterfall surrounded by fully dressed girls in the water, I had to wonder how long it will take before she will feel compelled to be more ‘modest’. She was already in the minority. I wonder whether she felt uncomfortable or just sorry for her oppressed sisters. The contrast was striking.

The numbers in Canada are not yet scary, but looking at the children and considering our immigration policies, it can get scary very fast. These immigrants did not appear to have any desire to integrate. They clearly have different values and strong determination to hold onto them. Those values are not friendly to ours, and definitely not accommodating to the alternative lifestyles we encountered the days before.

Our tolerance is tested from two ends. What will be the future of the trailer-trans, the rainbow Canadian and the bikini girl once the burka women start flexing their sharia-moral muscles? Will we have the strength, the will-power and the moral fortitude to defend them? Will we ever recognize that our tolerance MUST STOP at tolerating intolerance? Even if we do there is another problem: transvestites and homosexuals are not known for their fecundity. As the pictures show, not even the children loving rest of us can compete in this department with the fully dressed ladies. The biggest shock to me is the speed of these changes. This sight would have been unimaginable just twenty years ago.

We are on the crossroads of change and I am afraid nobody has a clue what we are getting into. What will the childless feminists do when the burka-women with their half a douzen children each will be in the majority? The sharia demanding ones that we are not only NOT trying to integrate but actively encourage through our multiculturalism to hang on to their medieval customs and ideas?

Our culture is caught somewhere between the demands for extreme permissiveness and extreme intolerance. Both want to be accepted fully and unconditionally, both want to transform the middle, blindly refusing reasonable accommodation.

Now here is the important question: at Sauble Falls in 2050, will a transvestite be allowed to wear a pink burka? 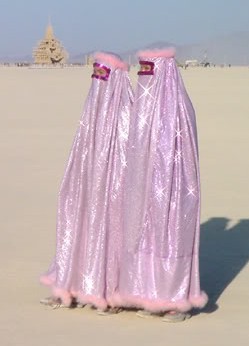 2 replies on “The crossroads of tolerance”