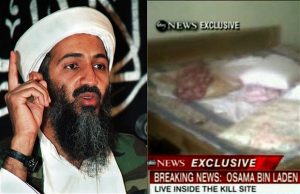 I am fed up with Obama’s ‘heroism’ and Biden’s clownery.

Two days before the raid on Bin Laden’s compound I came across this short video on Youtube.

Lawrence Wright’s book, The Looming Tower, is the best book I’ve seen on Al-Qaeda.
You may disagree with him, but he has a point.
I wanted to see bin Laden captured and publicly humiliated.
I think it was Victor Davis Hanson who pointed out that to achieve victory, you have to break the spirit of your enemy. Capture and humiliate its leader. Under no circumstance should you make a martyr out of him.

Lawrence Wright gave us the humanist version, I would go for the more realistic idea of Hanson.
I wanted to see Bin Laden shaven bald and beardless with a pound of bacon stuffed into his mouth, but I always knew that I was dreaming. Not even Bush would have had the guts to do anything even remotely humiliating to him fearing Muslim backlash.

What we got, was the gutless version.
I hate to break it to the Americans, but Osama won. He turned the US into a police state that isn’t any better at catching terrorists but made incredible progress oppressing its own people. But that’s a different subject.

What I want to talk about is the heroic decision of Obama to assassinate. CNN documentaries and weak-kneed commentators ooooo-ing and aaaaah-ing over the incredible bravery of the Commander in Chief heroically ordering someone half across the globe to shoot an unarmed man.

It was an extremely difficult decision to make, we were told, but I never got any details about the nature of the difficulties. What made the killing difficult? He could have been captured easily. He could have been taken alive to play out either of the humiliation or justice scenarios I referred to above.

Obama took the easy way out. Dealing with Osama and dealing with the Muslim world would have been the difficult choice. He did not have the guts to do it. He does not have the stature, the stamina, or frankly, the intelligence to do it. Obama is an ideologue, he does not know how to be diplomatic. He would not have known what to do. Except appeasement. Bow deeper to the Saudis? Maybe shine their shoes while sending more borrowed billions to their brethren hoping that we can buy their approval? How can you square that with the merciless administration of justice to Osama?

Osama bin Laden alive  would have been a serious political liability for a weak willed, weak minded president.
Killing Osama was the worst thing to do, but killing him was the easy thing to do. The right thing, the hard thing would have been using him to humiliate, insult and offend the religion of peace into …… what’s the word????? …….That’s it: ISLAM (submission)

Which leads us to this day. I said months ago, that I fear a war coming. Just before the elections, because it is known that such things always shore up support for the incumbent.  The only thing the US should not do is another war, but how can you tell this to an incumbent who thinks that it may give him the extra two percent he needs to win?

The future is not rosy.
BUT wait!   There is hope! I just listened to to the President’s speech in Las Vegas:
“No terror will dim the light of the values that we proudly shine on the rest of the world” What a ferocious, heroic sable rattling! Like the nerd who is kicked in the butt pretending that nothing happened. I will sleep fine tonight. There will be no war. Just some more appeasement and careful avoidance of offence. From the speech it was not clear who may be responsible.  I can already see the future: Buddhist monks subjected to cavity searches at US airports and more billions sent to Arab nations to buy their friendship.

As I was looking for information, I came across a link to an article from today’s National Post with a picture of Dalton McGuinty (our Premier in Ontario) sitting immersed in thought with a head-line “Dalton McGuinty pleads with teachers not to withdraw from after class clubs and sports”
McGuinty is a worse clown than Biden, with an even lower IQ but looking at the picture, looking at him in distress, I can see the appeasers’ tragedy. They really want to help. They really want good. They really want to be nice and this is what they get.
Wasting money on them, sucking up to their unions for nine years and bankrupting our province in the process. He did sooooo much for them, he gave them so much of the money that he took away from us and even from our grandchildren and this is how they repay him.
They want even more. He is trying to appease people who say that it is their constitutional right to get what they want, people who say that the problem is capitalism.

I can perfectly imagine Obama sitting somewhere in a similar pose contemplating the unfairness of life. He did so much for them. Helping them into power, sending them the head of NASA to make them feel better, sending them billions borrowed from the Chinese and this is how they repay him.
There is no justice in this life. He had a difficult day.

Marx said that “history repeats itself. First as tragedy, second as a farce.” Looking at the left I must wonder: what should we call it the 10th time?