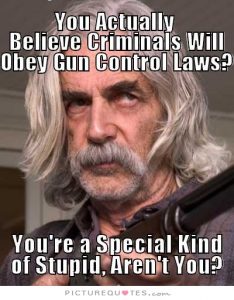 After the shootings happened in the Eaton centre two weeks ago, I was wondering how long will it take for someone to come up with yet another bright idea to control guns, while I was still fuming over the Bernie Farber civility argument. I could ignore the bad writing, the self-contradictions, the shallow, mushy touchy-feely banalities, but I cannot get over the fundamental stupidity of the suggestion that all people and all ideas and opinions should be treated as equal, regardless of the merits of the person or the opinion.

I was ready to talk about the stupidity of gun control and to explain what I mean saying that I want to be a gun parasite. I was also genuinely surprised to see that it took more than a week before the shtuff, in the person of Adam Vaughan in this case, hit the fan. 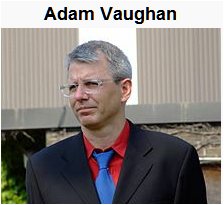 “If we can’t ban guns then let’s ban bullets,” he said. “If we can ban plastic bags, why can’t we ban bullets?” Lucky for him to have another amazingly brainy idea lying around to back up his own with.
(Read my thoughts on that genius idea here)

At a news conference, he also said:
“I am tired of emotion dictating the behaviour of politicians, when reason and evidence and compassion should be guiding their deliberation on this issue” Come again??? Compassion instead of emotion??? Oh, you mean the compassion that is the twin brother of hard core formal logic? Then I understand.
His reason and evidence based proposal also makes it quite clear what he means.

He probably never heard that the only protection against a bad guy with a gun is a good guy with a gun. That bullets or guns do not kill people, people kill people.
I will not bore you with the links; I could easily collect several pages worth of references proving beyond any doubt that places with no gun control are safer than the ones with it. Even the New York Times acknowledges the fact that places with more guns are safer than the places where guns are banned, in an article trying to explain why it does not matter. They are seriously presenting the argument that considering the correlation as evidence would be a case of the “post hoc ergo propter hoc” logical fallacy. The fact that the correlation exists just about any time and any place where the phenomenon is observed doesn’t mean a thing, but conservatives are obviously too stupid to understand that.
Then I could continue with links where others are making arguments to show how incredibly stupid the Adam Vaughan idea is. I could do the same myself, but ridiculing the Councilor is not my goal here.

I just want to call him an idiot

… because I honestly, seriously, sincerely believe that Adam Vaughan is an idiot. I really don’t know how else to describe him. This is the first time I ever heard about him, I don’t know him, the only evidence I have are his words and the very existence of this proposal. I find that evidence overwhelming.

Calling someone an idiot is shorthand. It is an exclamation mark on our opinion.
I wouldn’t call anyone an idiot without some evidence to back up my claim. Without me being able to explain why I consider the person an idiot. Calling someone an idiot is also clearly an opinion. There is no objective criteria attached to the definition. It is not very civil, it is insulting, but in most cases it is an encapsulation of a more complex expression of the reasons behind using the word. What happens in most similar cases is that a bombastic statement is made in a sentence or two that would require extended analysis to counter. This is the modus operandi of the left. Making bombastic, propagandistic and highly emotional statements because they know that they cannot be opposed on the same level, the same way, the same form. The only thing that is on the same level is calling them idiots.

Bernie Farber wants to celebrate different opinions, except of course the ones like mine, thinking and stating that he is an idiot suggesting that all people and all opinions should be treated equal.

Arguing for the bullet-ban, Adam Vaughan was very emotional in his appeal to his fellow politicians asking them to use compassion instead of emotions. With reason and evidence, of course. But reason and evidence would suggest that – if anything – the city should give away handguns (and bullets) for free to every law abiding citizen with a clean criminal record.  I am not suggesting that, but the evidence most certainly does.

I consider calling these two ‘idiots’ entirely appropriate because the ideas that they so proudly present to the public are idiotic. Please do not misunderstand me. I do not want to celebrate rudeness and vulgarity for its own sake, but I like to call a spade ‘spade’. I do see a place for opinions expressed in strong terms. The ideas of these gentlemen are insultingly stupid. Their arguments are an insult to our collective intelligence. Calling them idiots is a perfectly fair turnabout.

Why does it matter at all?

Why can’t I just take the only good advice Bernie is quoting at the end of his article:

“Never engage in a pissing match with a skunk; just let the skunks simply “talk” amongst themselves.”

Why can’t I let the Huffington Post skunks talk about themselves? Why can’t we let ALL the leftist skunks just talk amongst themselves?

Because when I stink, I stink to myself or to fellow skunks. When they do, they want to force their stink on the rest of us.

Bernie’s aspiration is to replace Barbara Hall as the next head of the Ontario Human Rights Commission.
He wants to be the arbiter of what is civil in a conversation. He wants to have the right to penalize the likes of me for calling him an idiot when he is advocating idiotic ideas.

Adam Vaughan wants to be the mayor of this city. According to several sources, he wants to run in 2014.
He wants power. I don’t know what else he wants to ban in the city, but this idea of his is certainly not encouraging. Stupid, ill-informed, emotional policies and decisions can harm us all. Hell, this stupid bullet ban proposal can do it alone! Can you imagine what he could do with more power?

The problem is NOT that Bernie Farber or Alain Vaughan are idiots, the problem is that they are dangerous, power hungry idiots. To whatever extent they can, they want to run and harm our lives.
Banning convenience, jeopardizing our security, forcing us to celebrate our enemies or at least to shut us up if we try to speak out against them.

Individually, all these petty powers are ….well, petty, but trust me, if they can get away with it, they will keep grabbing for more and more. The kind of controls they can impose, the kind of dangerous stupidities they can force you to celebrate are limitless.

Calling them idiots, calling them what they are may be un-civil, but it should be considered a civic duty.