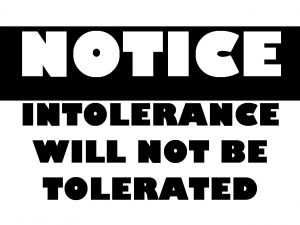 I am not a native English speaker which makes me sometimes humbled, sometimes puzzled.
I wonder how a culture can allow so much abuse to its language, the most important pillar of its existence

As the recent debates in Ontario and in the US demonstrate, gender identity and its related debates are getting seriously out of hand. Why? Because we allow the activists to define the debate through their own interpretation of simple words. Let’s try to look at the words ‘tolerance’ and ‘normal’ then a somewhat more complicated one: ‘homophobia.’

The word tolerance implies dislike. Voltaire expressed it best saying “I disapprove of what you say, but I will defend to the death your right to say it.”

According to the dictionary:
a : sympathy or indulgence for beliefs or practices differing from or conflicting with one’s own
b : the act of allowing something

In their efforts to become accepted, homosexuals (and especially their political organizations) are becoming increasingly intolerant. Vehement attacks on anything that may imply the slightest disapproval of anything they do. Demanding special privileges. Gay organizations, for example, would argue that public decency statutes should not be applied to them. Dragging people through human rights courts for expressing their believes.
Homosexuals seem to be intolerant of other people’s ideas and morals. What homosexuals are asking for is not tolerance, but unconditional acceptance. Again, tolerance implies dislike. Tolerance is a fundamentally moral stance as it represents the recognition and acceptance of differences DESPITE personal tastes, preferences and even convictions.

Homosexuals are going to great lengths to argue and to push for being accepted as normal.
Sorry guys (or gays (and gals and its)), but you are not. Not in any reasonable interpretation of the meaning of the word. Not biologically, not statistically. The fact that homosexuality is natural, does not make it normal. No species can survive if fully homosexual. Only heterosexuals can ensure the survival of a species. Homosexuality may be nature’s way to control population. Natural, not normal.
Statistics about homosexuality in human populations vary according to studies between 1-3%, with claims seldom going above 6%. Even six percent is just a deviation, not the norm.

Why is the push? EXACTLY because it is not normal. Gay activists are trying to make it ‘normal’ by fiat while they are also promoting it aggressively, hoping that they can make even the numbers ‘statistically normal’ if they can persuade enough sexually inexperienced but curious youngsters that it is biologically ‘normal’.

Again, according to the dictionary:
Irrational fear of, aversion to, or discrimination against homosexuality or homosexuals
or
an irrational hatred, disapproval, or fear of homosexuality, gay and lesbian people, or their culture

First known use of the expression was 1969 and the sloppiness of the definition shows it.
We can start with the etymology. Homo – phobia actually means irrational fear of humans, not of homosexuals, but never mind the stupidity for now. The fuzz gets into the picture with the definition.

What makes an aversion irrational? What differentiates it from a rational aversion? Or just a legitimate emotional one? If you are molested by a pedophile as a child, would that make your aversion rational?
At what point does fear become irrational? What is the meaning ‘discrimination’ in terms of a single person?  If I prefer the company of straight people, does that make me a homophobe? Let’s suppose that I am desperately desirous (really horny) for both members of a lesbian couple. My chances are zero, but since I want to get laid, I will discriminately look for the company of straight women. Am I, in this case, discriminating rationally, or am I a homophobe? When that guy in my past started aggressively fondling me, was that an irrational aversion or was it OK to protect myself?

Who can be the judge to answer these questions? Even if the answer is yes and we determine that the person is a homophobe, so what? What can we, society, rationally do about it? We (meaning gay activists and their allies) cow them, ostracize them, penalize them, in the end, one way or another, we just shut them up. But if this is truly a phobia (a mental condition) then wouldn’t they need therapy instead of a fine levied by a Human Rights commission? We teach arachnophobes to handle spiders to overcome their fears. Maybe what a homophobe needs is a good blowjob from a man. As a therapy. Two months after I came to Canada, I was working in my first job midtown Montreal while living at Pont Papineau about 13km away. We had a transit strike, I finished after midnight, I had no choice but to hitch-hike. A gay cruiser picked me up, trying to convince me to let him blow me because he can give a much better blowjob than any women. Maybe he was right. I’ll never know. Maybe I could have been cured and now I could cruise happily looking for young men to pass on the torch, so to speak.

Why is this all so important?

Because intolerance begets more intolerance. The intolerance of the gay community toward any disapproval of whatever they do cannot possibly create a genuinely tolerant society. Trying to shut up or even criminalize those who disagree with their political aspirations is not very conducive to the creation of an atmosphere of live and let live.

Do they really think that coercing someone to pretend to like what they clearly dislike will help that person to like them? (Think of the expectations on politicians to embrace gay parades)
Do they really think that antagonizing religious institutions will gather them more support? (Think of suggestions to dismantle the separate school board for their refusal to embrace gay straight alliances)
These battles are no longer about equal rights. Not for a long time. Gays want to go from ‘bottoms’ to ‘tops’. From victims to rulers. From the ones who get screwed to the ones who screw us. From being subjects of the agenda to the ones defining it. In many ways the strategy is succeeding. Next to an idea with an environmental concern, selling a gay project idea is the one with the best chance to get a grant. The success of gay politics already far outweighs their share in society.

All of which only bothers me to the extent any similar identity politics does, but the question is not what do I like or dislike. The question is how far can this go without a backlash? It is not a very good strategy to antagonize the whole of society for petty and momentary political gains.

Am I a homophobe?

(In the popular, widely used meaning of the word)
I would like to think that I am not. I don’t particularly like it, but I don’t fear it in any way. Apart of the half a douzen passes that were made on me when I was young (one of which I physically had to fight off), I don’t have the experience.  Sorry guys, but I love the gals. I can’t help it. I was born this way. There is nothing against you in it.
I dislike gay politics – but it would be too long to explain here why.
I find guys speaking with the lips amusing – just as I find the mannerism of several other subcultures funny.
I don’t like gay parades. I think they are vulgar and boring. But I don’t like parades in general.
Do I have a problem with gay relationships? No.
Do I support gay marriage?  – I am a libertarian, I don’t think any kind of marriage is the state’s business.

Do I think homosexuality is a sexual deviation? Yes. Do I think it matters? No. Deviations are natural parts of statistical distributions.
In the list of atypical sexual behaviour, homosexuality is far less strange to me then a whole lot of others. I find homosexuality far more understandable than fetishism. Or S&M. Or some extreme role playing.
Two guys giving each other physical pleasure is more normal in my eyes that an adult putting on diapers to be treated as a baby before he can get a boner. Or a heterosexual couple pissing on each other to get aroused. I do consider homosexuality perfectly acceptable, but I should not be expected to say things about it that I do not believe or not to say what I do.

Just like any normal adult, I have my likes and dislikes. I am tolerant, but I do not tolerate intolerance too well. If you cannot accept who and what I am, how can you expect the same from me?

Guys – I mean GAYS! People like me should be your most valuable allies. People who disapprove who you are, but will defend to the death your right to be that way.
When the Muslims come for your heads, you will need us. Well, when they do that, we’ll need each other. Maybe we’ll even hug.

A miraculous Mandarin (or what am I)

Let me tell you about the one time when this war on normal, healthy human sexuality really pissed me off.
The 1992/93 season of the Canadian National Ballet included the staging of Béla Bartók’s Miraculous Mandarin with the choreography of James Kudelka. I saw it in what at that time was still called the O’Keefe Centre.
The story for which the music was written is a beautiful allegory about the power of passion. Kudelka turned this glorious and universal message into a homosexual coming out of the closet story. Just to make it contemporary. In the final scene of the play, we see grandma giving a blowjob to grandpa, daddy fucking mommy on the kitchen table while the Miraculous Mandarin ascends to stage-elevator heaven with his newly ousted gay lover. It was such a revolting travesty, such a disgusting misrepresentation of the original intent that I am still fuming about it.
Does my disgust over the gay agenda distorting this beautiful work makes me a homophobe?

Let me frame my last question:

An older guy is sitting in a bar somewhere in the west sipping his beer. He has jeans, boots and a cowboy hat. A woman in a suite with a brush cut comes to the bar and sits down next to him.  “Tell me” – she says – “Are you a real cowboy?” The guy thinks a little then says – “Well, I was born and raised on a farm, I spent my whole life around horses and cattle, so I guess yes, I am a real cowboy. How about you?” The woman says provocatively – “I am a lesbian. I love women. I cannot help but to think of pussy all the time” – then she storms out of the bar. A couple comes in, sit down next to the guy.  The woman turns to him and asks – “Tell me, are you a real cowboy?” He answers – “all my life I thought that I am, but I just found out that I am a lesbian.”

So my question is this: can I be a homophobe if I am also a lesbian?