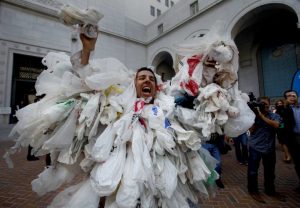 The major wants to scrap it – meaning to take away the compulsory aspect and the penalty of non-compliance. Retailers would still be free to charge for them just as they were before the bylaw took effect in July 1st 2009 but without the threat of penalties if they decide not to.

I hope it will not surprise you that some city councilors already came up with amazing new ideas on not only to keep this new tax but also to double it and to make it a real tax by taking it away from retailers. This would be very interesting to discuss, but this blog is not about the sleazy nature of city politics but about its offensive stupidity.

What are they good for?

Before we get to why is this plastic bag policy so stupid, we have to think about what is great about the shopping bags and why does it make so much sense for businesses and retailers to give them away for free.

Plastic shopping bags are the most cost-effective way for retailers to advertise their business. Taking this away from them hurts their ability to differentiate themselves.

Retailers do not like to see you packing your own goods away. It is not very efficient. Tasking the cashier or even a third helper speeds things up considerably.
Let’s calculate: if you pay $12.-/hour (barely above minimum wage) one minute of his time will cost you 20 cents. The cost of a plastic shopping bag is about 2-3 cents. If you can save one minute per checkout, you saved the cost of at least half a douzen shopping bags.

The conclusion of a transaction is probably its most positive moment. You are happy to get the goods, they are happy to get your money. Making these last moments of the interaction as pleasant as possible is of great interest to the retailers. They want you to leave their stores with good feelings. Helping you to pack your purchase into a bag they provide for free helps them achieve that.

All these benefits put together make the cost of the plastic bags a great bargain for the retailers, a better service for us.
Plastic bags benefit the retailers, benefit us and benefit the environment, but just for the sake of the argument, let’s suppose that it is not so. Can the 5 cents charge make a difference?

Where is the brain?

My mother in law still uses the well designed, strong LCBO plastic bags they stopped giving away in 2008 She lives in Prague. Going through my mother’s apartment in Budapest after she died, I found three.

I still have a few in the glove compartment of my car. I sometimes use them in the LCBO stores where they invariably create awkward conversations with the staff when other shoppers are asking for them hoping that they have been reintroduced. We NEVER threw out a plastic bag after a single use. We never bought prepackaged garbage bags for home use either. Good quality bags we reused as we needed them, the cheap ones we used for garbage or for the dog while he was still around.

So what do we do now? We carry bags, but since we do not want to soil them, absolutely everything we buy, goes into an in-store food bag which is allowed by the law. While before we had no reason to put bananas, oranges, pineapples into another layer of plastic bag, we have a very good reason to do so now, when they go into our own cloth-bag. Any packaged meet product will go into a bag. So do any frozen product. Anything that can leak. In the end we come out of the store with more plastic then we used to before this wise law was enacted. Sometimes we pay for the bags, but rarely.

After three years, we are still incensed by the coercive nature of this bylaw.
The checkout in our neighborhood deli used to be a pleasant and efficient experience. Young girls handling your purchase: look – punch – bag – look – punch – bag – etc….. – pay – thanks – have a nice day. Now it is: look – punch – look – punch – merchandise pile on the counter – pay  – then everybody waits while the customer takes her own bag and packs the stuff into it. The customer is pressured, the people in the line are impatient, the cashier is bored and frustrated.
If the store doesn’t help us by packing the stuff we purchased, then they have to pay the productivity penalty. If they are not allowed to help us, the whole interaction becomes mildly unpleasant.

When you look around in your world, you see plastic everywhere. It is the most amazing, most flexible and variable material ever invented. The one word advice of Mr. McGuire from “The Graduate.”

Suggesting that plastic is not friendly to the environment is ridiculous. You can look at this list that makes the point. You can find others demonstrating that plastics are far friendlier to the environment than ANY of the alternatives, but what is particular about this bylaw is that it does not attack plastics in general, only a subset of it in particular. The question then becomes the ratio. What percentage of the plastic we use (or even just of what we use for packaging) are plastic bags. Product packaging uses far more plastic than the bag it is put in in the store.  I could not find good numbers on what percentage bags represent of all the plastic we dispose of, but I am willing to bet hard cash that it is tiny. Even an all-out plastic bag-ocide would not make a noticeable difference. Attacking plastic bags is an entirely symbolic act with purely symbolic benefits.

The intent, the point and reality

The point was to offer an outlet to the faithful to publicly profess their faith. What good is it to be friendly to the environment if nobody can see it? Paying for you bag or whipping out your own is like throwing a cross or saying “Peace be upon him” after mentioning the name of the prophet. Walking around with your own enviro-friendly bag is a political fashion statement.
The point was the show of power to prove that they can coerce the rest of us into envirobedience; to push the anti-human, enviro-fascist agenda into our face EVERY DAY, at every moment of a voluntary free market exchange.
The point was to advance an anti-industrial, de-development agenda.
The point was to lay the ground for yet another enviro-tax.

Why is it such a big deal?

Once we allow the government to take control of it, it will develop into an untouchable fixture of our lives. It is happening all over the world. In some places it is already in a more advanced stage, under government control and far more expensive than here. What is happening in Toronto will not stop with the 5 cents left in the retailers’ hands. This is a sin tax with an infinite growth and scope potential.

What I detest the most about this bylaw is what it does to my interactions with the retailers. This law forbids them to be nice to me. To offer me something for free. To do something for me. It is a law to force them to end a transaction on an unpleasant note, reminding both of us how powerless we are.

At the least, you have the power to propagate this.

3 replies on “My 5 cents’ worth on the plastics wars”