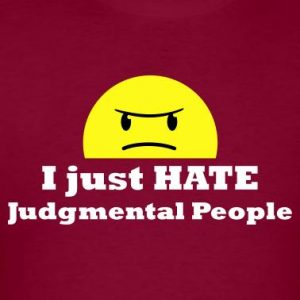 I was trying to explain to my sister (who does not speak English) what my blog is about.

“Why do you have to be so judgmental?” she asks. “I am more accepting, accommodating and liberal than you are” I used as an example the view difference about the meaning of “richness” between “Z” – whom she knows – and I.

I do not see myself as particularly judgmental. I have fairly well established opinions, I am ready to defend their logic and support them with evidence, but still I see the world mostly in terms of questions.

She says she is liberal and that she is. Her position represents the general liberal attitude of wishy-washy relativism. That everything is OK, there are no values, only personal preferences and why can’t we just all love each other and be nice.

I should ask her why is she so judgmental about me ……..

“Some people prefer blue, some green, some like polka dots” she said

Yes, I said, in most cases it makes no difference, but if you need a camouflage on a snowfield, what you wear may make a difference….
If you endanger others by insisting on the wrong choice, shouldn’t you be judged?

Which is, by the way, one of the points of this blog.

That if looked at properly almost anything can have implications going beyond the obvious.

We do many things that seem to be harmless personal preferences but on close examination it has far reaching consequences. I contend that politics touches far more aspects of our lives than we are willing to acknowledge and I just want to shine light on them. Does that make me judgmental or inquisitive?
I want to understand the intricate relationship of politics with our daily lives and I want to expose harmful decisions and attitudes.

But I can also ask, what’s wrong with being judgmental?

We are making judgments all the time. I don’t like my neighbour. Is this a dislike or a judgment? He is French. How about now?

If I just dislike something, that is OK, because it is just a personal preference, but if I know why, then it is not acceptable?

Besides, shouldn’t we be judgmental about leeches like “Z”? It was mentioning his name that made my sister call me judgmental. Can we allow ourselves to consider criminal behaviour a matter of personal preference that we should tolerate as such?

Not hating the sinner only the sin may be very Christian, but is it practical? Should we forgive the sinner without scorn? How could then the poor sinner know how much we hate the sin? Can we have a good society where we unconditionally support really bad behaviour?
Now wait a second, isn’t that what we have in our wonderful welfare society? Where we actively encourage people like ‘Z’ to ‘retire’ at fifty? Thousands of teenagers in major cities to live on the streets?

In the same call, my sister complained about my teenage nephew who is refusing to go to school but still feels entitled to his allowance. She refused to give it to him saying that she also has to work for the money. Doesn’t that make her judgmental?

2 replies on “Why am I so judgmental?”