◀None Of The Above
Why am I so judgmental?▶ 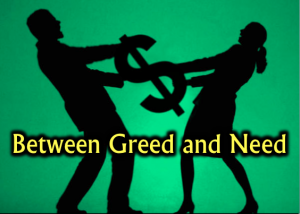 Whereas I will try to explore some attitudes toward money. How some perceive need and greed and why these attitudes are harmful

I have two friends, A. and Z. – Mr. Greed and Mr. Need. Correction, Z. is no longer a friend. He came to visit me with a book of Obama in his hand and left not only our place but our life altogether when he discovered an Ann Coulter book in mine. There was a heated argument in between which will be the relevant point of my musings here.

A. is one of the few friends with whom I can have a bloody fight without having to worry too much about losing the friendship over the disagreements. They are also among those exchanges of ideas that never really get anywhere. I make my points, he concedes some, we finish the discussion with some sort of agreement but the next time we meet we stumble on the same argument with the same disagreement as if we have never talked about the subject before.

A. is a hardworking, diligent, super decent guy with some serious moral indignation about the greedy capitalists. Although he is not from there, he represents the authoritarian attitude of East Europeans that I talked about in an earlier post. The problem of this world in his eyes is greed, pure and simple. That some man want more than they need and they will stop at nothing to get it. They will exploit their workers and cheat their customers just so that they can afford to themselves another pointless luxury.
He is incensed by the profiteers, and the profit motive itself, by globalization and bankers and speculators, all the boogeyman of the anti-industrial, anti-globalization, anti-free market environmentalist left. He would love to see them controlled, regulated and punished while I am unable to explain to him that whatever he would like to see done, would make matters much worse, would be a punishment on himself and his children.

Z. is the most immoral bum I’ve ever known. He lived on welfare for most of the past thirty years supplemented with shoplifting and the occasional grant as he is a struggling artist directing stage performances for the grant bums circuit.

At around the time he was about to turn fifty, he announced to me that he is retiring. ‘What do you mean?’  I asked. He explained that he is not going to bother with the grant application process any more, he will just live on welfare (and the five finger supplement, of course). This coincided strangely with the welfare office declaring him chronically unemployable. What this means in practical terms is that they stopped bugging him with demands to look for work.

Z. thinks (and says) that people like me should be grateful for the existence of the welfare society, because that is the only thing that stops the likes of him from clubbing the likes of us for our money.

Neither A. nor Z. is willing to see beyond their immediate perception of the ‘problem’ and their feelings about it. The righteous indignation in the case of A. and the immoral, selfish and childish entitlement demands in the case of Z.
Where the two meet, is the agreement that possession in great measure must be ill gotten by definition.  Where they differ is their definition of the ‘rich’ and their focus.
A. thinks that the rich want too much, Z. thinks that they have too much and he needs what they have more. (He also thinks that he deserves it but that’s another story)

When my younger son was about two, he discovered the power of the word ‘need’. He recognized with the wisdom of two years olds, that it has more power than the word ‘want’. Want is more subjective than need. I mostly took things away from him when I needed it and I said so. He figured from experience, that as long as he wants to do something with what he wants from me, he can call it a need.
The political left understands and operates on this principle.
Defining your wants as your needs makes them more objective, a bit more beyond the control of your will. My son didn’t just want my gardening tool; what he wanted was to help me but then he actually really needed the tool to do his part in the gardening. Sometimes your needs are driven by your wants.
But how can you tell ‘need’ from ‘want’?

I want to go to places. I need a car. Do I? Do you? It is just a convenience. If yes, then do I need a Honda or a Rolls-Royce? When does a need become a want? A friend, notoriously bad with money, was leasing a Lexus when he really couldn’t afford it thinking that he needs to project the image of being rich to become rich. Did he need or want the Lexus?

Z. lives in a spacious, rent controlled three bedroom apartment, alone with his wife for $600/month (as of my last information 4 years ago). The market value is more than double, but he sued the landlord and used every trick in the book to keep his rent legally low. Does he need a three bedroom apartment? Does the landlord need the market rate rent? I am sure the landlord has more money than Z., but shouldn’t he distribute his ill-gotten profits evenly amongst his tenants? Don’t the other tenants have needs? Does Z. need a car? He doesn’t need to go to any place where he can only go with a car.

Asking these questions is not entirely hypothetical. The definition of greed is wanting more than you need. Z.  definitely does not need three bedrooms and only has it because he does not have to pay for it what it is worth, what others would happily pay to get it. Isn’t him living there a sign of pure greed?

The meaning of money

Z. laid his theory on me about the meaning of wealth a few years before our breakup. He said he would feel rich if he could drive his car to downtown Montreal with the feeling that he can afford to pay for the parking there. It is of course a hyperbole pointing out that what’s important is your comfort level about your finances and that that is driven by the little concerns.

You are rich if you can afford a lifestyle acceptable to you without the need to work for it.

Notice the irony. According to his definition, I am rich. According to mine, he is. I can afford to park downtown Montreal and he has a lifestyle that is acceptable to him without the need to work for it.
I am far from being rich (on any other term than Z.s’), in fact I am getting dangerously close to retirement age while my savings are not even near to where I would want them to be for a comfortable retirement. I will likely have to work into my 70s to afford comfort.

The role of money

I hope I managed to show that the meaning of need, want, greed and richness are very subjective and the attitudes toward them are very personal. Their role in the economy and politics is not.

The point I am unable to get through to either A. or Z. is that money is far more than what they seem to see. What they see are only the most obvious manifestations of money and what it enables people to do.

Being rich is not what they think. There is no way in this world that Bill Gates or Mark Zuckerberg can reasonably spend their money on themselves. Most of the rich spend very little of their money on themselves. They invest. Then they invest most of the income from their investments. They provide capital to the economy, jobs for people and quite often significant amounts to charity. What do they get for it? The power to make things happen their way. They decide what to invest in, what kinds of jobs to create and what kind of charity or politics to support. We can discuss whether this is good or bad or to what extent it is true but this is an entirely different question from the one we started with.
The question we started with is about:

The popular perception of being rich is that you can afford another steak with some caviar on it, drinking Dom Perignon with it on your own yacht. That is what incenses A., the flaunting of money, the excessive luxury.
Z. has no indignation, he just wants the stuff. A. thinks that the world would be a better place if people, especially the rich would be satisfied with less but that still does not change the fact that his feelings are based on envy.
The envy of Z. is pure, simple, spiteful and brutal. He represents the attitude of the occupy crowd, the Obamob.

The problem with fretting about need and greed is that it endangers the economy; it threatens rational thinking about it.
Politicians are always playing on the emotions of people like A. & Z. very successfully.
The price of oil goes up, blame the greedy oil companies.
You rent goes up, bash the greedy landlords.
If you are broke, it is because someone else is rich

All of which makes no sense whatsoever.

Shouldn’t we ask what turned these greedy bastards greedier one day than they were the day before? Shouldn’t we also ask why they aren’t even greedier? Since greed is their motivator, what makes them stop where they do? Sudden Guilt? Goodwill? Are we kidding?
Could it be, maybe, just maybe that things are NOT entirely under their control? That they may be subjects to the laws of the market just as we are to the laws of physics?

The morals of this story:

Now I need you to answer two questions:

What is your definition of ‘rich’ and what do you think of mine?
How can I get my simple message across to the indignant ones like A. or to the demanding ones like Z.?

2 replies on “Need, greed and the meaning of money”